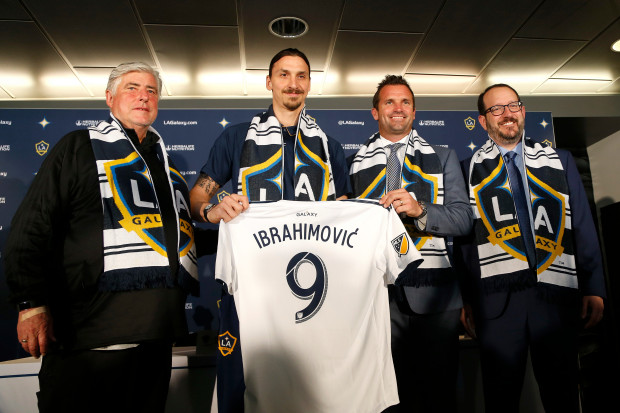 Five days after announcing that former Head Coach Sigi Schmid and Team President Chris Klein had made a "collective decision" to part ways with six games left in the season, the sinking Galaxy traveled to Toronto for what ended up being another extravagant waste of two solid individual performances (this time from Jonathan dos Santos and Rolf Feltscher) and Zlatan’s 500th career goal.

This weekend, they’ll return to Carson and try to avoid another 5-0 annihilation at the hands of the streaking Seattle Sounders.

It’s the most massive game of the season, in that anything but a win would basically end their playoff chances.

It’s also a firm reminder that, regardless of outcome, this team is beyond quick fixes, and the front office, led by Klein, has a legacy-defining offseason quickly approaching them.

They’ve already been shown up in the standings by the new kids at school.

Missing the playoffs for the second consecutive season seems inevitable.

Now, just this week, it was reported they may face competition for the signature of their next head coach in old rivals San Jose. Atlanta, Chicago, Columbus, Minnesota, Vancouver and even the USMNT could throw themselves into the mix too.

How the stakes were ever allowed to get this high has naturally been a question on the minds of fans and media alike -- even this blog -- but it’s also largely an academic one. The FO knows what they’ve been doing isn’t working. The real question is: what do they plan to do next?

Many fans would be satisfied by either giving Gregg Berhalter the keys to the castle or pairing a big name international coach with an experienced GM.

What I’d ask you to consider is that neither of these is enough. More than just a coach, a GM or even someone with both roles, what the Galaxy actually need is far greater.

They need someone with vision, yes, but for the whole of the organization, not just the first team.

Someone with accountability but also just enough allowance for failure. (And failure on their own terms!)

Someone whose timetable isn’t only measured in coaches but maybe even GMs.

In short, what the Galaxy really need is a sporting director. And here’s why...

The first thing you may be wondering is, what is a sporting director, and how exactly does one differ from a "technical director", "general manager" or even "Vice President of Soccer Operations"? Aren’t they all the same?

Put simply, teams that employ sporting directors may retain people in those roles as well, but she/he outranks them all.

As Wikipedia’s entry on the position states:

While the coach takes care of the team in daily work... the sporting director is, in many cases, a member of the executive board and therefore an executive director.

Given that MLS teams don’t have boards or executives that run for election, the Galaxy’s hypothetical sporting director would simply not be a member of one.

They could be on equal footing with the team’s president (if not the same person) or at the very least, right below him in terms of authority.

We’ve Tried Combination Roles Before... and the Results Are Middling

If the sporting director is that close to the president or is the president themselves, why not just replace Chris Klein? Or just give a coach a long-term contract with complete control of the organization?

To be sure, these are legitimate questions. Some may see the post I’m describing as too much.

Yet make no mistake: firing Klein, which many fans will argue is what he deserves, would be a shocking development. AEG did just give him a five-year contract extension, despite overseeing the worst season in franchise history.

And whether you believe that’s because they only care about making money or because they like Klein for "other" reasons, it’s almost a moot point. A much more realistic demand would instead be to limit the say he has in soccer operations.

In fact, using the example of his predecessor, a strong case could be made that this is all that's necessary. Unlike the 42-year old Klein, Tom Payne largely left decisions over personnel and tactics up to his coach and general manager Bruce Arena, a stance that made sense with his title as President of Business Operations.

Klein, who started on the soccer side as Academy Director, was named Team President in 2013 and has presumably been juggling the off-field realities of running a team with the on-field realities ever since.

Should we be surprised by his struggle to formulate a plan and stick with it? His dual mandate almost precludes it. However, even those who would hold a coach/GM role like Arena, Berhalter or Peter Vermes would open a floodgate of similar concerns.

For one, what if such a coach fared poorly at one role but exceled at the other? Could the FO simply convince them to step back from the former to focus on the latter? What if they couldn’t?

On the flip side, what if they were so good at both that someone managed to poach them -- as the USMNT did with Arena? As they soon could do with Berhalter or Vermes?

In either case, the Galaxy would again have to fill two key positions at the same time.

Hiring a dedicated sporting director would demonstrate that the FO is serious about not repeating the mistakes it made after Arena left. She/he would be an advocate of organizational continuity, responsible for establishing clear goals at every level of the club program and plotting contingencies for these very scenarios.

More importantly though, they’d be a necessary safeguard against not only a coach’s short-run thinking but Klein’s as well.

That's not guaranteed with either a coach or Klein filling both roles.

That's not even guaranteed with a standalone general manager.

Hiring 1-2 More People Is Not A Shake-Up

During the conference call in which the team explained their decision to part ways with Schmid, Klein started out by asserting that Schmid had the final say on roster decisions, a claim seemingly verified by a press release issued late last year.

According to the LA Times’ Kevin Baxter though, this wasn't always the case. Furthermore, Klein himself once mentioned that some decisions saw everyone -- from Sigi and his son to Klein, Vagenas, technical director Jovan Kirovski and even Dan Beckerman and Phil Anschutz -- get involved.

That’s no less than seven people who may have been consulted for any number of things. Wouldn’t adding a sporting director along with a GM and a coach just make things even worse?

Well, maybe, yeah. But if the Galaxy did do that without letting anyone go, it’d be very surprising on a couple levels.

First, while club officials deny that they’ve been forced to cut costs, it still seems unlikely Phil Anschutz would want to spend almost as much on his backroom staff as he does his players.

Second, despite whatever unique titles they may have been given, it’s far from guaranteed that certain individuals (ahem, Peter Vagenas and Jovan Kirovski) aren’t redundant in some capacity or in danger of becoming so. A FO that refuses to consider this would doubtfully hire a sporting director, who expects to act unilaterally, in the first place.

That again makes it the best way of determining whether the team is finally headed in the right direction.

We’ve briefly discussed what a sporting director does as well as what makes him/her special. In looking at the trend the Galaxy appear to be on ever since breaking up with Bruce Arena, we then touched on what could happen if they hired another person to be "Bruce 2.0" or if they continued the status quo of having Klein in charge of everything. Ultimately, neither option appears healthy or sustainable.

Fans frustrated with what they see as a lack of progress, as rivals reach out to coaching targets, must remember the only move the Galaxy make that really counts is giving operational control to the right person.

Whatever coach and/or GM they hire is only as powerful as they’re allowed to be. A sporting director doesn’t beg for that power; it’s baked into their contract.

What is the Galaxy's single greatest offseason priority?