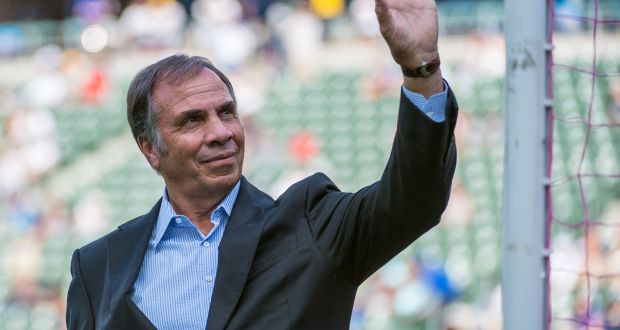 Correction: An earlier version of this article mentioned that Bruce Arena sold his South Bay home in the process of relocating back to Virginia. This claim was based on an anecdote mentioned by Kevin Baxter on the Corner of the Galaxy podcast. On the November 5th show, Baxter noted that, while his wife did seek a move back to Charlottesville, they still kept their house in Manhattan Beach. The article has now been amended with the latest information.

Four days after Kevin Stott blew the final whistle to certify their shock Decision Day collapse to the visiting Houston Dynamo, and the fans took to Twitter en masse to issue their strongest ultimatums yet to club officials, could the LA Galaxy have just given the first genuine indications of their plans ahead of what is probably the most important offseason in club history?

That’s at least the impression Doug McIntyre is under.

In his latest column for Yahoo Sports (which was quietly published hours before the Galaxy would have kicked off against LAFC in a fourth El Trafico showdown), the veteran reporter was quick to address the situation in Carson, writing that, even before the curtains came down on the Galaxy’s season last Sunday -- leaving them without a postseason berth for the second consecutive time in 10 years -- a top-to-bottom evaluation of the club was already underway and in fact had begun as soon as former Head Coach Sigi Schmid departed.

No doubt most fans will take little comfort from this, as it really only corroborates what President Chris Klein had already promised in a conference call with reporters back in September. But McIntyre’s independent confirmation of it is still noteworthy for a couple reasons that shouldn’t be scoffed at.

For starters, however much trust and confidence there is left in Klein and Co.’s ability to right the ship, knowing that they have kept their word to re-evaluate everything pertaining to the club’s technical operations and make changes as necessary is an emphatically good thing.

No, it doesn’t absolve them of their failures to build a team that fans could reasonably expect to contend for silverware since former Head Coach Bruce Arena left in 2016, nor does it mean that the Galaxy will have a front office that knows what’s it doing from now on. As with any business that underperforms, the bare minimum investors should demand is a complete audit of all current practices, and this is no different.

Still, for a franchise that has struggled with transparency and accountability as much as it has and has even been accused of gaslighting its own fans, the bare minimum is not always a sure thing. Remember, it was in this very same conference call that Klein framed Sigi’s departure as a "collective decision" -- an account that several insiders dispute (see below). So although they definitely don’t score any points for keeping their word, they don’t lose any either.

Furthermore, if the team ever hopes to rise above the bare minimum, then making this review count is the best time to start. Rushing it to completion or cutting it short as soon as the team’s on-field product showed modest improvement would likely only mask current problems for even longer. Which makes it pleasantly surprising (and a tad ironic), that the front office seems to have realized this, while a minority of fans, who argued interim coach Dominic Kinnear should get the job on a full-time basis if he led the team to the postseason, didn’t.

(According to this report, he still did well enough to merit an interview.)

All that aside, the biggest name McIntyre has found linked to the club this offseason? That would be none other than the aforementioned Arena.

In his own words:

"The former Galaxy head coach and general manager recently interviewed for a front office job within the organization, according [to] multiple sources.

The exact title of the role hasn’t yet been determined — could be called GM, could be President of Soccer — but basically it’s a GM-like position to run the soccer side of things alongside team president Chris Klein. My understanding is that Arena interviewed with Klein a few weeks ago, but that others were also being considered."

Of course, the 67-year old Long Island native, true to form, would not admit that he had been contacted by Klein or anyone else from the Galaxy or AEG.

"I think the people that can confirm or deny that are the Galaxy, not me," he told Yahoo Sports.

But make no mistake: if the Hall of Fame coach was indeed engaged in talks with the front office, it’s hard to exaggerate how this affects the rest of the Galaxy’s offseason plans. To draw a metaphor, if whispers of interest in Guillermo Barros Schelotto were throwing a rock through a window, then talk of bringing back Bruce is akin to tossing a grenade at it.

For the longest time, it appeared as though the Galaxy were only seriously considering one person for their vacant manager position: Gregg Berhalter. Former Timbers head coach Caleb Porter was widely regarded as their fallback option, mostly because he was Klein’s college roommate. At the same time, there was no word on any possible sporting director or general manager candidates.

That Arena is now being linked with that very post and apparently NOT the head coaching job signifies that, even if he isn’t hired, Klein and Co. understand the importance of giving technical control to someone who has some track record of success.

But questions remain. Are they actually reaching out in good faith, or is this a put-on not unlike the one that Lakers fans lived through in 2012 and 2013, when they were led to believe 11-time champion Phil Jackson could return to the franchise as coach or GM?

Does Bruce want to come back? If so, he probably wouldn’t be cheap. After resigning from the national team last year, he nearly sold his house in Manhattan Beach to move back to Virginia, where he coached for two decades. And even as far back as 2014, he expressed a desire to spend more time with family and even take up teaching one day.

There’s the all-important issue of fit too. Is Bruce really the right choice to lead the Galaxy front office in 2019 and beyond? His knowledge of MLS roster rules is well-known, but so is his contempt for analytics and penchant for signing veterans. At a time when the league is becoming younger and more data-driven, those positions may be outdated.

Perhaps any attempt to answer those questions is best saved for another time. After all, Bruce wasn’t the only name McIntyre’s sources touted as a front office prospect. Todd Dunivant, who we previously examined as one of five candidates for just such a role, was mentioned as well.

In the end though, so thoroughly does this shatter every preconceived notion about how this offseason might go that that it may be hard for fans not to feel cautiously optimistic. There’s lots of work to do before the team can realistically contend for titles again, but so far, they seem to be approaching the challenge with an unexpected humility.

How do rumors of Bruce Arena's possible return make you feel about the potential for real change this offseason?