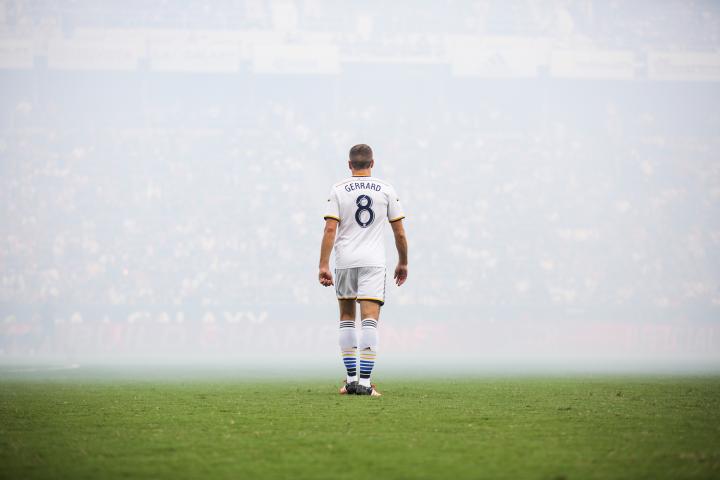 Thanksgiving Day in America marked the final day of Steven Gerrard's career as a professional player, after 18 storied years as a professional player. A month has passed since the Liverpool legend announced his departure from the Los Angeles Galaxy in the wake of their away defeat to the Colorado Rapids on penalty kicks in the playoffs, and most of the dust has settled, even upon the final question about his American legacy: did he fail? The answer from most corners of the Galaxy support seems to be a definitive 'yes.' Ask any fan why Steven Gerrard failed in their eyes, and you'll get a wide range of answers, from "didn't care" to "wasn't good enough." Yet these answers are not evidence in themselves to such an important question. So without further ado, let us dive into the murky waters of the Galaxy's Gerrard Experiment.

The most common comment about Steven Gerrard's career in the States was that he simply didn't care about playing, that he simply came to Southern California to collect a final paycheck before his retirement, that the only bright spots for him in LA were the city's poshest restaurants, the Malibu beachfronts, and his Beverly Hills manor. Yet there are plenty of holes in this theory that cannot be ignored. The first is that of Gerrard's salary. If he was really looking for a colossal paycheck, it is far more likely he would have stayed with Liverpool, as the Reds (per Gerrard's second autobiography) offered him a larger sum than the 6.3 million a year paid him by the Galaxy. With this in mind, why would Gerrard leave the club where he was adored, the club he was most attached to, and the club which gave him the greatest thrill playing for, if not because he truly wanted to work somewhere else?

There is also the evidence given by his demeanor on the field. When Gerrard celebrated his goals, which were, to be entirely fair to his detractors, quite few in number, at only five in his two seasons, did he coolly stroll away from the net with an agate-hard face, like an Ibrahimovic, a Balotelli, or a Benteke? No. He ran screaming to the Galaxy support, waving madly to the delirious Riot Squad and celebrated jubilantly with his following teammates (see goals v San Jose, New England, and Houston if curious). Is that the mark of a player only there for the money? Unlikely. Also, just look at the way he acts during games. Gerrard is always looking around, directing the Galaxy players ( TWCSN's Joe Tutino frequently uses the phrase "Gerrard, directing traffic" about him in broadcasts) and positively leading the team forward with words of encouragement, with or without the armband, a skill that Robbie Keane, the beloved departing Galaxy captain, was unable to manage, instead caustically berating his teammates when they failed to pass to him.

Finally, just look at what Gerrard did around the club. His ex-teammates speak glowingly about the advice and mentorship that he he provided for them in the good times and bad, from young players like Sebastian Lletget, to even veterans and stars of the ilk of Jelle van Damme. Lletget in particular was vocal in his compliments, thanking Gerrard via Instagram for his words in the aftermath of the Colorado defeat, and for helping him to improve his game over the past season. Also, remember the speech he gave the Galaxy staff before the playoffs? Most people do not go to such lengths, certainly not people who do not care about their clubs, and even Gerrard's fiercest detractors must accept the classiness of such a move.

In spite of Gerrard's classy behavior around Los Angeles, there is still one problem: he never won a trophy with the club. He arrived after the Galaxy had won three MLS Cups in four years, and in the two seasons he was in LA he failed to reach the final prize in either. His performances were hardly the stuff of legend, either. Two goals and three assists in his maiden campaign were a poor return, and did little to sate the expectations of Galaxy supporters. Three goals and his eleven assists, second only to Giovani Dos Santos's twelve in 2016 were a vast improvement, and Gerrard was key to the Galaxy's good form in the early part of the season, but he missed much of the season through injury. What was the problem? Most likely, his age. At 36 years of age, Gerrard's legs were simply unable to support his box to box tendencies for much longer, and the result was his slowing of pace, and his constant injuries in the latter part of 2016, all of which hampered his performance. This seems the best answer for why he failed, in the end.

Much of the criticism of Steven Gerrard during his time at the Galaxy, as seen throughout this piece, was unfounded, but the fact remains that his onfield contribution was simply not enough, and the Galaxy's Gerrard Experiment, though selling huge numbers of his shirts and exposing the franchise in a positive way to the world, will likely be recorded as a failure. This is indefensible, but at least his efforts should not be questioned hereafter. He really did try, you know.