It's that time of year again when the LA Galaxy take on their housemates Chivas USA to determine who's tops in Los Angeles. The tarps will still be up, so the atmosphere will be unlike any previous renditions of the Clasico. Still, it's always a hotly contested match, with even the mayor weighing in.

As you can see from the lead photo, clearly the mayor is a Galaxy fa... 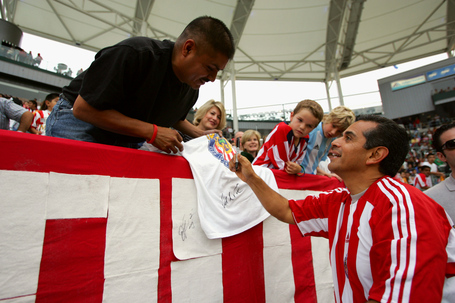 To shed some light on the mayor's favorite team, we're talking today with Alicia Ratterree of The Goat Parade. If afterward you still want to hear more thoughts from Alicia on Chivas, she was interviewed for this article in The Guardian. Now, onto THE INFORMANT!

LAG Conf: If Chivas has had a problem to begin this year, it's been scoring goals. How has the return of Juan Pablo Angel and the recent addition of Paolo Cardozo helped the offense?

TGP: Angel broke the albatross that was Chivas' streak without a penalty attempt, as well as the home scoreless streak, a couple weeks back when he scored a penalty against Chicago. But he's only played in four matches this season and he's been dealing with a head injury that has slowed him down. I'm not sure if he'll feature Saturday, but once he gets playing a consistent run of matches, I expect he will start scoring again. Perhaps more importantly, JPA has been mentoring the young striker corps at the club, with new signing Jose Correa discussing how much he looks up to Angel. Obviously, JPA's first priority is to score goals, but beyond that, I think he's supposed to help the younger players adjust to the professional game, to MLS, and to Chivas.

Cardozo has featured in two matches since he came to Chivas. Since Galaxy folks are well aware of his game, I'll say this: Cardozo shows a lot of potential, but like too many of his current teammates, he's still working on how to make that final pass or get the best shot. Still, he's shown moments of promise, and I think he'll get more time in the lineup as he gets more used to playing with this team.

LAG Conf: Just how incredible is Dan Kennedy? How much of his performance is having a good back line to work with?

TGP: You're absolutely right: Dan Kennedy has been incredible. I think he didn't get the attention he deserved last season, when he played equally well, but I'm glad to see people who don't watch Chivas every week realize what a fantastic goalkeeper he is. I can't predict the future, but I think if his form holds he should definitely be in the running for goalkeeper of the year at the end of the season.

Although Kennedy has already bailed out his teammates several times this season, I do think the defense is improved over last year and has taken some of the pressure off him. And with two starters returning from last season in Ante Jazic and Heath Pearce, as well as a veteran MLS right back in James Riley, there is far more stability and comfort on the backline with Kennedy. I think they have had breakdowns, especially in the past few matches, but the defense seems to be supporting Kennedy more overall this season, and that will hopefully make Kennedy look even better.

LAG Conf: What's your favorite surprise so far from the 2012 MLS season?

TGP: For Chivas: The emergence of two players signed from Ecuador - Oswaldo Minda and Miller Bolanos. Minda is a holding midfielder, and has locked down the position from the opening match. He wins balls in the midfield and distributes well, and he has been able to control the midfield in a way that no other player on the squad can. Meanwhile, Bolanos has taken a bit to adjust to the league, but he's shown creativity and corner kick abilities that was sorely lacking on the team. He's small, crafty, and he's willing to track back and help on defense from the wing as well. I think both signings were very shrewd, and they demonstrate excellent scouting from the club.

For MLS overall: I'm happy to see the pecking order in the league shift. Everybody talks about parity and the fleeting nature of success in the league, but it is nice to see that just about every team can dramatically change their fortunes every few years. Obviously, it makes for mediocre play at times, but I like the fact that every fan on every team can have hope for success from year to year.