I for one had an uneven week of MLS Fantasy League action. Most of my picks worked out, but my team did horribly, partly because of a Donovan Ricketts red card for a clumsily executed karate kick clearance. (It really was bad technique, as the entire sequence could have been avoided had he just stayed in front of Deshorn Brown to collect the thru ball)

Plays like the Ricketts red card serve as a helpful reminder that some weeks, no matter how much planning and preparation you put into your lineup, you're going to have bad luck. Maybe even rotten luck.

So don't stress too much if you happen to have a bad week. Have confidence in the decisions you make, and move on. 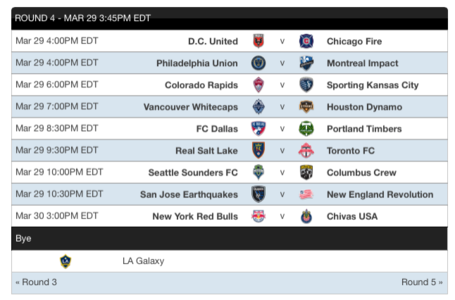 This is another round where buying long-term investments appears to be a better strategy than scrambling for short-term gains. For example, I would recommend Shea Salinas ($7.6) in a second if San Jose doesn't have a bye next round. Same goes for the new and improved Benny Feilhaber ($8.1), who will miss the week after. (Ideally, you never want to transfer a player close to a bye round unless absolutely necessary)

Three teams have a Double Game Week (DGW) in the near future: Philadelphia during Round 7 and New York and Houston during Round 8. Since four of the next five games for the Dynamo are on the road and you probably own a Houston player or two anyway, you should probably focus on Philly and the Red Bulls this week.

Le Toux Fast Toux Furious: Sebastien Le Toux ($8.7) has been on fire so far this season, averaging seven points a game. Under John Hackworth's new look offense, Le Toux is producing as well as earning bonus points, which elevates him from a shiny object to a must have pick this week.

Defensively, Amobi Okugo ($9.0) is expensive, but a bonus points machine and a lock to start both DWG matches. If you don't have the funds, Fabinho ($6.5) is a cheaper option who will provide the occasional assist and give you extra money to work with, but won't score as many points.

Avoid Zac MacMath ($5.0), or the shiny object. His price is cheap and he may be a serviceable option for the next few weeks, but his performances have not been convincing, and with #1 draft pick and MLS ready goalkeeper Andre Blake waiting in the wings, it wouldn't be a surprise if Hackworth decided to hand Blake a start during the double week.

This is New York (For 2014): The Red Bulls are difficult to figure out at the moment. While they have a favorable schedule coming up, they aren't playing very well. In theory, Thierry Henry ($11.0) should pounce all over a weak Chivas back line, but the Frenchman is overpriced and isn't getting any younger. And if the Impact are forced to play on the Olympic Stadium artificial surface next week, Henry is out, since he famously refuses to play on turf.

(Not that I blame him)

Lots of fantasy managers are high on Lloyd Sam ($6.6), but I'm not sold on him just yet. Until the winger is no longer rotated with newly capped U.S. international Eric Alexander, his starting spot will always be a question mark.

If you're looking for a keeper, Luis Robles ($6.0) is an attractive option. If New York can get their defense together and cut out the individual mistakes, he should be able to post a few shutouts. Armando ($6.5), the new Spanish center back signing, has 33 CBI's in two games and has seemingly won a starting position, so keep an eye on him as well.

Don't give up on Portland! Ben Jata has been making the point not to lose faith in the Timbers players, Darlington Nagbe ($9.4) in particular. I agree: Portland is just too good a team to continue to struggle at creating chances and keeping clean sheets.

Interestingly enough, Stumptown Footy reported yesterday that the Timbers closed their practice session to the media, so they're up to something. Look for them to bounce back eventually.

Strategery pick of the week: Thierry Henry ($11.0) Hard to see him not scoring against a Chivas side that's leaked a league high six goals.