After what proved to be an overly long off-season for our beloved boys in blue, white and gold we finally made it (we did!) to MLS opening weekend 2017. I spent the better part of the weekend basking in the odd bit of glory that is soccer in the United States. I've been wanting to write about this sport that I have fallen head over heels for (sorry NBA, maybe if the Kings were not in a decade long funk things might be different, but here we are and the beautiful game has stolen my heart, truly it's not you, it's me). So here are a few of my league wide observations (and a couple Galaxy specific, because this is a Galaxy blog and they are my hometown team).

We'll start with my observations and takeaways from the two brand spanking new expansion teams that we welcomed into the league. Minnesota United FC (The Loons!) and Atlanta United FC.

If you're like me and a crazy person, you kicked off Friday with #PTFCvsMNUFC for the Loons' first ever MLS game (after several up and down years in the NASL) and boy howdy did they get a welcoming. Beaten down 5-1. As I was telling a friend of mine in Timbers Army after the match, as a Galaxy fan, the Timbers scare the heck out of me. One of the best parts of the night was the full stadium TIFO: Completely on point though. 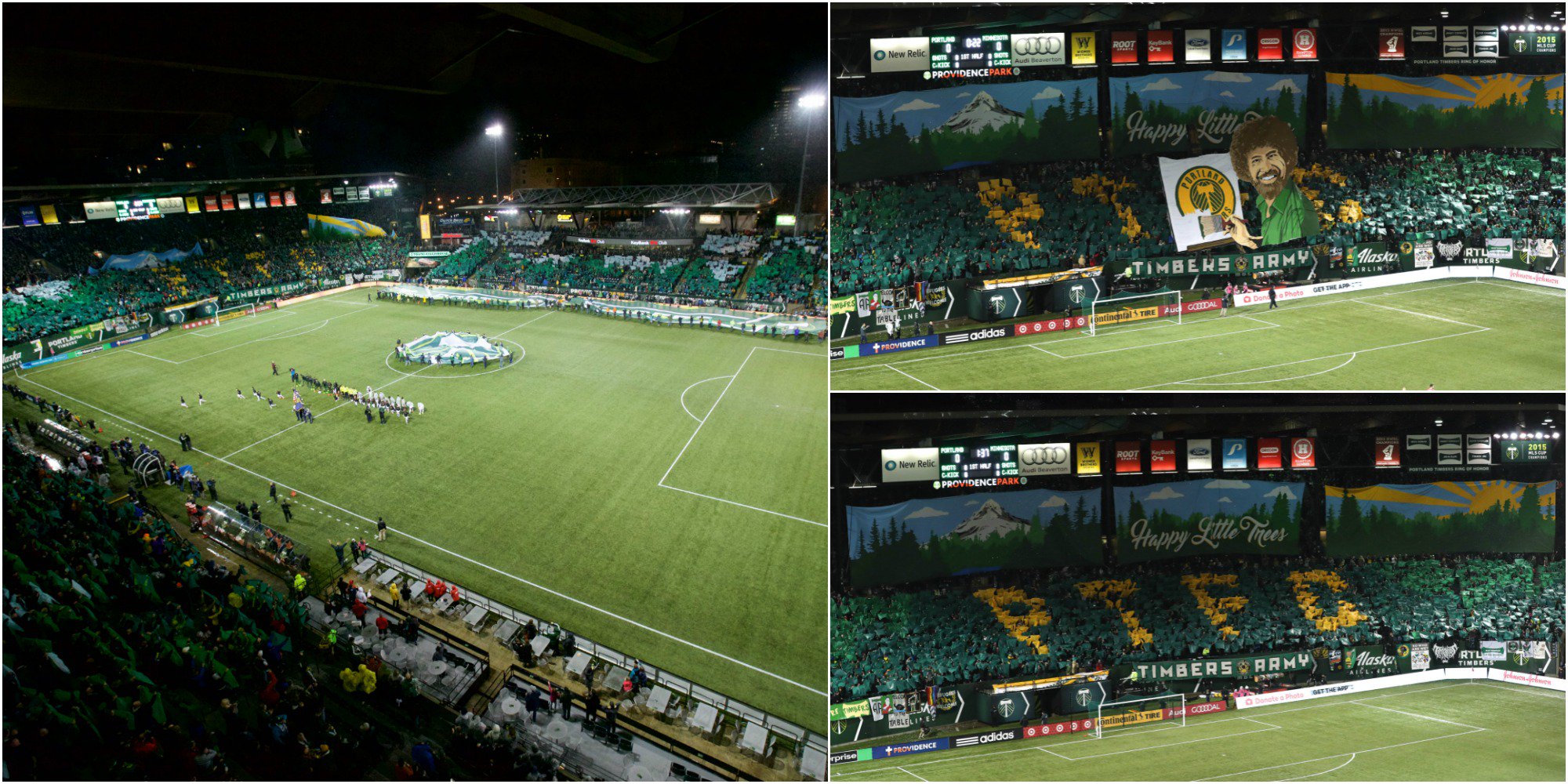 Once Portland finds a second center back to partner Ridgewell they are going to be a monster, till then they may leak goals. However, Chará and Guzmán should shield the defense enough and that attack is diverse and powerful enough where it shouldn't matter too much. Nagbe looks fantastic playing alongside Vytas (which is great for USMNT fans) and Adi looks to be completely in form already. The big test will be this weekend when they travel to LA to take on our Galaxy. Portland was miserable on the road last year (they didn't get three points outside of the friendly confines of Providence Park during the 2016 season).

Enough about the Timbers this is supposed to be about the LOONS! You could see flashes of a potent attack forming, some nice combination and several dangerous chances just not ENOUGH dangerous chances. About halfway through the season, barring injury of course, this Minnesota team could be very dangerous throw in the fact the Adrian Heath has a good track record developing young attacking talent (Dom Dwyer and Cyle Larin) and Minnesota has a lot to look forward to in the coming months and years. That defense on the other hand looks miserable. I count maybe one MLS level defender in the bunch (small sample size institute approved) It's going to take some time for Adrian Heath to get something cohesive out of that, but when you don't have a starting caliber outside back on your roster (we wouldn't know anything about outside back issues, would we?) that spells trouble.

By the time the second game of Soccer Sunday rolled around I had already been to see our Galaxy in person, and made it home to watch two matches on MLS Live (HOUvsSEA and SJvsMTL) so I was already a bit fatigued even before the first match of the day, but I wasn't going to let that stop me from watching the inaugural match for Atlanta United FC.

Let me start by addressing something that bothers me (and many others). Certain chants and fan behaviors I find intolerable, now it is their first MLS match so I can give some leeway, however if the supporter culture doesn't develop and squash that from inside the stadium it could grow into something extremely offensive. Personally, if I hear an offensive chant in my section at StubHub Center I politely approach the culprit and explain that there isn't a place for that type of intolerance. This goes for anything overly crude (there are a multitude of kids at every game), overly sexual, racially insensitive, or offensive to the LGBTQ community. One of my favorite bits about the MLS is how welcoming of all types of people they are. Sure not every player, or every team, or every fan but by and large we are one of the most diverse and welcoming leagues in our country and the world and it's something we should carry with pride and respect. That means checking this behavior in the stands.

ONTO THE GOOD bits about the crowd/game. Atlanta United and Terminus Legion did a fantastic job of organizing, getting people interested and invested in the game, selling merchandise (seriously did EVERYONE in the stands have a scarf and jersey? because it seemed that way). The first half hour (and most of the match) the crowd hung on every touch, defensive action, and move forward regardless of how misguided and disjointed.

This team though has potential to be versatile and scary. As with MNUFC once ATL has time to gel they are going to be good. The defense will be bolstered come summertime and despite Pankhurst and his diminishing athleticism he reads the game well enough that if his partner, be it Pirez or Miles Robinson, can cover for him athletically they should be solid. Throw in Tyrone Mears and Greg Garza (and Brad Guzan over the summer) and you have the makings of a potent defense.

Regarding Red Bull, what's going on with that team? I know Veron supposedly suffered an injury but they've been practicing and playing in the 4-2-2-2 for the entirety of preseason and then suddenly move away from that this match? back to something resembling a 4-4-2 or 4-2-3-1? Mind boggling. The first half they looked exactly like the team that flamed out in the playoffs and just bombed out of CCL (#CCLFever). Granted they did pull out the victory but that was mostly due to tired legs/inexperience and less about how dominant they were. Just odd, a team with that commitment, that tactical awareness and that talent level shouldn't struggle in big games the way they do.

And that's all I have for the expansion games! Tomorrow I'll be posting about RETURNS (where I delve into player returns, be it from injury or just back to the league/form).

What did you think about the debut of two new teams to our league? Lemme know!