Breaking down film from last night's LA Galaxy victory over Real Salt Lake. How were the Galaxy able to get two early goals, and a look at Brian Rowe's first save.

It's Sunday, the burgers are on the grill and the hot dogs are sizzling. Hopefully you've got a nice brew, or a fun cocktail. Now that you're all comfortable, or bored after being comfortable, or waiting for them burgers to finish, let's break down some highlights. That sound like fun? Highlights. 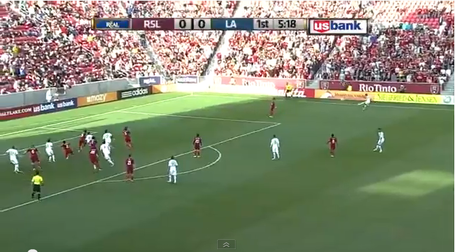 Oh hey, it's the first goal! So Juninho is up there and he's just taken the free kick. The real action is happening in the box where LA are outnumbered six to five. Kyle Beckerman is at the top of the line watching the ball. Charlie Rugg is behind him, ball is going to sail over both their heads.

Hector Jimenez is next, and he's jostling with RSL forward Olmes Garcia. Omar Gonzalez is running in with Chris Shuler trailing him, about to sneak up on Lovel Palmer. Mike Magee is an arm's length from Tony Beltran. All eyes are on the ball, expectations are on Omar Gonzalez connecting with the ball near post. Here's a better angle. 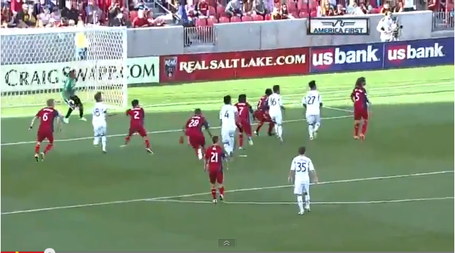 Omar's going to jump, but the ball is clearly going past him so there isn't much concern. Borchers and Beltran are about to converge on Magee. This goal is going to come down to brute strength and positioning. It's a Magee sandwich, and without the frilly toothpick. 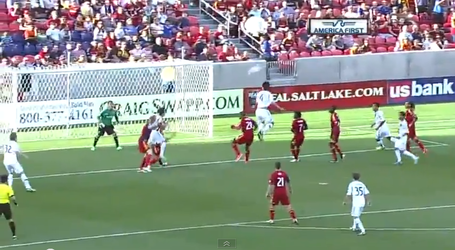 Magee is able to jump before Beltran, and get a left forearm on him. That's all it took, positioning and strength. Note how Grabavoy doesn't even bother jumping with Gonzalez. He knows that ball is going to sail over Gonzalez' head and has turned to face Magee before the ball has even gone over his own head.

It's hard to capture in a screenshot, but Beltran, realizing Magee got his head on the ball, throws his legs back trying to draw a foul. You can tell he was trying to draw a foul cause he stayed down looking at Magee as no. 18 went to the corner to celebrate, and didn't complain to the ref despite having gone horizontal on the play.

Next slid is Brian Rowe's first save, and it was a nice one. 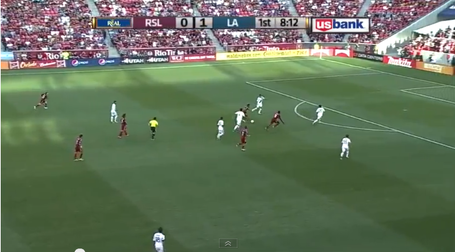 An Omar Gonzalez pass has bounced off of Kyle Beckerman. Gonzalez appeals for handball to no avail, the ball bounces to Javier Morales who manages to nudge it Joao Plata before Gonzalez can get his foot in. You can see in the screenshot, Morales has passed and is now moving. Does Plata a) attack and complete the give and go, b) attack and shoot a high percentage shot, or c) take a twenty five yard shot because he thinks he has Brian Rowe out of position? 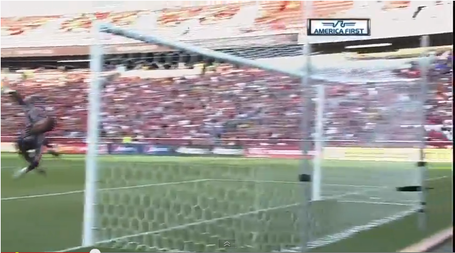 If you guessed C congratulations! look how much air Rowe was able to get, using his right arm to punch the ball away from the right corner which Plata was most definitely going to hit. Not bad at all for a first MLS save. 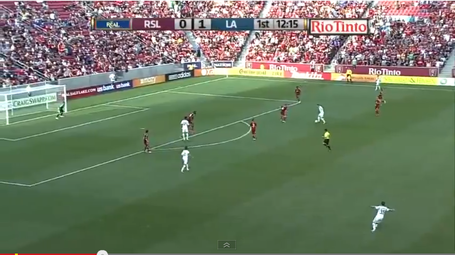 Okay, four minutes later and LA are threatening. Jack McBean has the ball with space. Greg Cochrane is at the bottom of the screen playing airplane. Always a fun game. Charlie Rugg sits between two defenders, and Hector Jimenez is at the top of the screen. McBean is going to take on his defender, which earns him a double team from the defender at the top. Jimenez will take advantage of this. 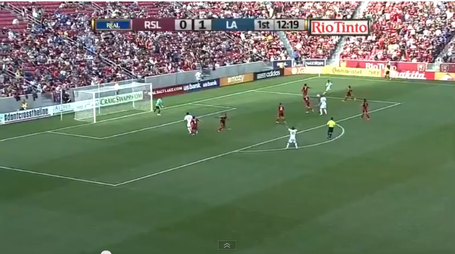 Palmer turns around and runs back into the space he created for Jimenez, but it's not going to be good enough especially since it's going to keep Charlie Rugg onside. This is important because RSL's central defenders have decided to pull an offside trap. Whoops. Greg Cochrane is now doing jumping jacks. Brochers is pointing and yelling at the ref to stop looking at Jimenez and look at the offside trap that...oh, right. Rimando goes down anticipating the gentle tap in, Rugg smashes high for the goal. 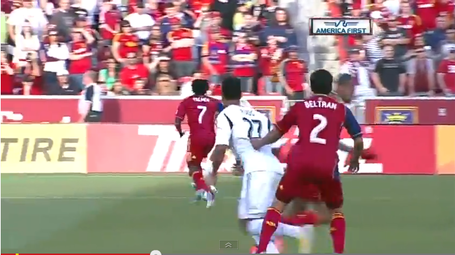 And that's why you don't pull an offside trap when your left winger is sprinting to close down on the cross. If I were to come to any sort of conclusion about this first thirteen minutes, it would be that LA was able to capitalize early because of mistakes on double teams.

We'll see how smooth the sailing was from here in part two.