Bruce Arena told reporters in preseason that part of the reason for going after target forwards was to allow Landon Donovan to play in the midfield permanently. While the move didn't pay off in goals, it did pay off allowing Donovan to lead the league in key passes.

Bruce Arena told reporters in preseason that part of the reason for going after target forwards was to allow Landon Donovan to play in the midfield permanently. While the move didn't pay off in goals, it did pay off allowing Donovan to lead the league in key passes over the weekend with six. 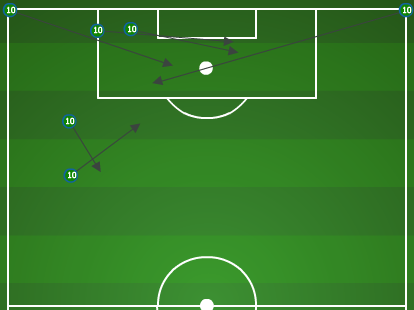 Donovan's performance was notable enough to make Matt Doyle's Three Things from the weekend, and as you can see in the Opta chart four of the key passes were from the run of play. Donovan ran freely between a third forward role and a distributing midfielder role. With defenders having to so much attention to Keane while acknowledging Samuel, Donovan found himself with the ball in space with some frequency. That also led to moments like this:

Robbie Keane and Samuel each are able to occupy two defenders, so when Donovan starts his run out wide Tony Beltran is caught between a rock and a hard place. If he goes to mark Donovan, Keane has a one on one in front of goal. Donovan's too fast for making up ground and Keane's too good a passer, so once Beltran made his choice Donovan was going to have the ball in the penalty area. It took a world class save from MLS Player of the Week Nick Rimando to keep the ball out of the net.

Not only does Donovan have the shot there, but you can see Samuel at the end pointing out the passing lane that opened up. The trio of Donovan, Keane, and Samuel is going to give lesser defenses in MLS fits, and they didn't do too bad against an above-average Salt Lake defense. Not that playing well is going to console those involved.

"Soccer is a cruel game sometimes and we got judged on results. I think we can be happy with how we played, but at the end of the day we have to score, and we had too many chances to score and that puts our backline and goalkeeper under a lot of pressure when we don't finish off opportunities. We have to be better going forward."

No matter how well LA plays, points in the standings are all anyone will remember from the year. They only have six points available to them in the month of March, plus the opportunity to continue on in CONCACAF Champions League, so it's imperative that the team starts turning this potential into goals.