FIFA 14 will be released tomorrow, so it's time to look at the details of the new EA Sports football game. They've added a new new world stadium, Boca Juniors' home stadium, but still no stadiums in Brazil or any new MLS representation.

With FIFA 14 set to be released tomorrow, September 24th, it seemed like time to go over what will and won't be in the game. For MLS fans, the game is still largely defined by what's not in it; specifically any MLS stadiums. There is one MLS team with their stadium in the game, Vancouver has had BC Place in the game for the last few years. That has to do with Vancouver being the home of FIFA development since the idea was pitched two decades ago. 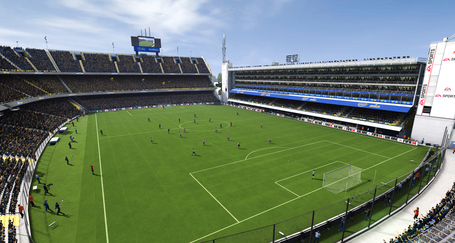 They did add one stadium in the Americas, LA Bombonera in the Boca district of Buenos Aires, Argentina home of Boca Juniors. It joins BC Place, Arena del Centenario, and Estadio Azteca as the only new world stadiums to be represented in the FIFA series. The past few years have seen FIFA focusing on adding UEFA Champions League stadiums (Ukranian side Shakhtar Donetsk gets their stadium in the game this year).

With currently no plans for a World Cup game to be released in 2014, it'll be interesting to see how FIFA handles that lack of representation. Estadio Centenario and Azteca make it in as classic World Cup stadium, BC Place due to Vancouver's history with the FIFA series, but La Bombonera shows they are looking to represent South America more.

It's inclusion also calls attention to that fact that FIFA is adding the full Argentinian league as well as the Chilean league. They're also adding additional Brazilian teams to bring the total to 33 leagues, over 600 clubs, and more than 16,000 players.

Here's the gameplay trailer, featuring Clint Dempsey as a Sounder