El Jimador has returned with a another edition of their soccer branded tequila bottles. MLS, US Soccer, and Mexican Football Federation logos grace the bottles.

El Jimador has released it's 2013 batch of tequila featuring US Soccer, MLS, and Mexican Football Federation branding. It's their tequila blanco (el Jimador also has a resposado and anejo which have been aged in barrels), which is 100% agave. Yes I'm shilling here a bit, but I also saved many a college friend from hangover by suggesting that don't buy tequila gold, so I feel like I'm qualified in this arena. 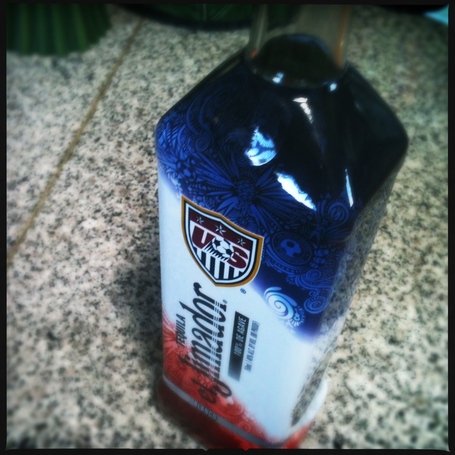 It's a very pretty bottle.

The red, white, and blue bottle has the US Soccer logo right in the center. Last year all three of the bottles had a soccer ball covered design (seen here in a Free Beer Movement article) with MLS as the blanco, Mexican soccer as the resposado and the US soccer bottle as the anejo (at least in that picture, it could have been nine different combinations). Brown-Forman is the parent company of el Jimador, and they're in their third year of a multi-million dollar deal with Soccer United Marketing where Brown-Forman brand El Jimador is the official tequila sponsor of MLS, US Soccer, and the Mexican national team's annual US tour. El Jimador is currently the best selling tequila in Mexico.

"Soccer is el Jimador's top platform and a great vehicle to engage and create a deeper relationship with our consumers," said Jesus Ostos , brand manager for el Jimador. "Given the success of last year's commemorative soccer bottles, we continue offering aficionados the opportunity to bring their passion for soccer to life with Tequila el Jimador."

This week's stream of the week is Chicago Fire vs. Columbus Crew, Saturday at 5:30 pacific.

Also, it's delicious. I recommend a tequila sunrise.