What's in a goal? LA Galaxy vs. Monterrey edition

Monterrey was able to get the lone goal against the Galaxy with a whole lot of skill. There were tired legs out there, but LA had nothing to hang their head about.

Share All sharing options for: What's in a goal? LA Galaxy vs. Monterrey edition

The longer the clock ticked in Monterrey, the more difficult the odds became for the LA Galaxy. Even though the club had successfully kept Monterrey off the scoreboard for eighty minutes, without two goals of their own Monterrey would win the series. The fans in Estadio Technologico grew louder with every passing minute as LA showed more signs of fatigue.

Bruce Arena had just brought in Jack McBean for Leonardo, after subbing out Todd Dunivant for Mike Magee. The team was now effectively in a 3-4-3, playing with nothing to lose but without the energy to keep possession and make something happen.

The Galaxy had just braved a shot attempt in the 80th minute. Cesar Delgado (no. 19) was all sorts of active and sent a long ball to Humberto Sauzo who was right in front of the six yard box. Luckily Sauzo's attempt went a bit high and Carlo Cudicini was able to reset the play. However, that was one of a series of shots Monterrey had taken in the second half.

Carlo Cudcini's goal kick didn't make it father than A.J. DeLaGarza, but then DeLaGarza's chip forward was intercepted by Severo Meza's had. LA was in trouble. 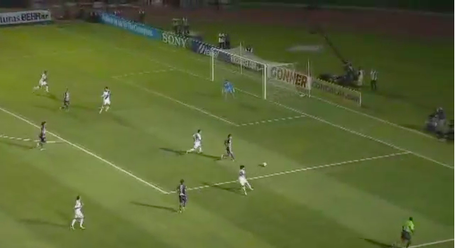 The CONCACAF replay starts way too late, an it's been difficult to find extended video. We come in here with Delgado chasing down Meza's return pass. You may remember this defender and midfielder combination from Monterrey's last goal scoring attempt. Chances are this won't end well.

A.J. DeLaGarza had to step up on Meza. As pictured, he is currently raising his right arm at the assistant referee as if to say "hey, there is a man behind me and Juninho is chasing after him. Isn't this man offside?" However, it does appear from the way the back line is positioned that unless Delgado has rocket boots Omar Gonzalez and Leonardo kept him onside.

At that point DeLaGarza can have no affect on the play, while Juninho has to put pressure on Delgado. As you'll see in the picture below, he's got about a yard to make up and he's closing fast. 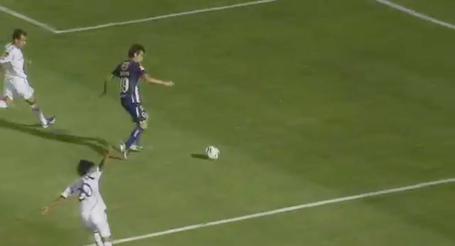 He would have gotten there too, if it weren't for Delgado understanding the situation perfectly. Because he sprinted in, passing two teammates on the way, he already has his passing target in his head. DeLaGarza is looking for offside, Juninho is trying to close him down, but Delgado knows exactly the angle he wants his pass to take. 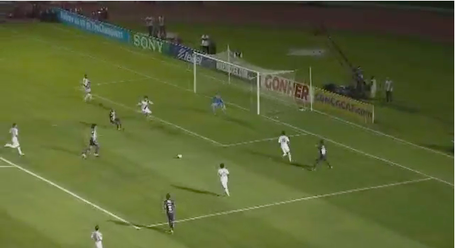 Omar Gonzalez can't read minds. It's very unfortunate and it would be a whole lot simpler if he could. Everything about Delgado's body language suggests that he's going to send a cross toward the goal when he reaches the ball, or hold the ball on the sideline before figuring out what to do. As such, Gonzalez is playing the entry pass. He's getting into his squat, preparing to make a leap. No one is expecting Delgado to spin and kick in one motion, to hit the trailing man Aldo de Nigris at the top of the penalty area.

Delgado's one touch pass is so quick Juninho won't be able to get that left foot out in time. Think about that, Delgado will reach and kick that ball before Juninho takes his next step. 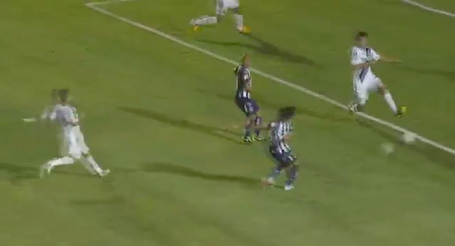 Gonzalez is gonna try and get in between de Nigris and the goal but there just isn't time. You can tell Marcelo Sarvas really wanted to be involved in the play but it just moved so quickly. Aldo de Nigris was also a one touch on the play, right foot, knowing he had to beat Gonzalez to the lane.

Still there's hope, Carlo Cudicini has seen everything play out in front of him and has gotten himself exactly at the angle de Nigris plans to take. 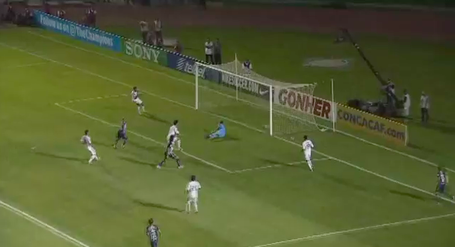 Bad luck Cudicini. The ball rolls underneath him and into the back of the net. A whole lot of skill took advantage of a tired and young back line. That experience and skill of Monterrey was rewarded with a nice bounce after Cudicini was able to make contact with de Nigris' shot.

With an extended replay, we could see who let de Nigris go. It could have been Sarvas. If we're looking to assign blame and Sarvas got beat on a dead sprint, it'd still be hard to blame Sarvas for the goal. Monterrey was able to make four players make tough decisions with three players.

Gonzalez was the lynch pin of the whole thing, but had he stepped up to de Nigris and a cross came in he'd look just as out of position. Leonardo was in no spot to help on a crossing ball.

In the end it was the goal that was coming. It's good to see goals like this broken down from time to time as a reminder that the other team is allowed to be good at soccer too.