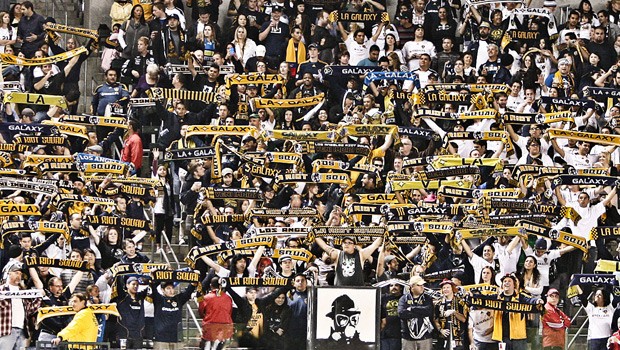 Ultimately, the LA Galaxy would like to become a global soccer brand, with followers and supporters well beyond U.S. borders. A global fan base is a key reason behind the sustained success of teams as Manchester United, Real Madrid, and Barcelona, who have fans spread around each continent.

What is the current geography of LA Galaxy fandom?

We can use use data from Google Trends to measure the level of interest surrounding the LA Galaxy around the globe. The data track the number of searches that are related to the LA Galaxy (filtering out Galaxy only searches, which often relate to Samsung's smartphone, and including queries using the keywords 'la galaxy', 'galaxy soccer', 'los angeles galaxy', 'mls galaxy', and so forth).

First, by looking at searches over time, we can immediately notice that Galaxy interest spiked in 2007 with the arrival of David Beckham. It hasn't reached the same heights since, although there have been shorter spikes (with Landon Donovan-related news in 2014).

Looking at global interest, instead, we see that the LA Galaxy have already a following that is not exclusively US-based.

The popularity of the team is even higher (in relative terms, that is by considering LA Galaxy searches as a ratio of total queries) in Ireland and Panama than it is in the U.S. Our star striker, Keane, and goalkeeper, Penedo, are doing wonders in generating interest around the Galaxy in those soccer-hungry countries. Galaxy appeal is, however, evenly distributed in many other regions and countries: South-East Asia (especially Indonesia, where the Galaxy went on tour in 2011, but also Singapore and Philippines), the U.K., Nigeria, and Australia.

If we look at specific cities, local areas dominate, with Torrance having the most fanatic following, followed by LA, Long Beach, and Irvine. But Irish capital Dublin can surprisingly compete, with a level of following at least comparable to the one in Norcal.

In the post-Beckham era, using only searches during the past MLS season, some of the interest from Manchester has understandably vanished, but it skyrocketed in Singapore, and increased in Malaysia, Vietnam, and France. In particular, it is nice to see that the team is quietly forming a following in Asia.

The U.K. interest is concentrated around familiar soccer towns: Manchester, Liverpool, London, and Birmingham. No doubt these searches are due to obsessive Google queries by current EPL players dreaming to play for the Galaxy at some point.

For 2015, it's easy to predict a new wave of supporters from Liverpool, and hopefully of Liverpool supporters outside the U.K. Liverpool FC is particularly popular in Africa, judging by Google trends, and some of these fans may continue to follow Steven Gerrard, although in the new, and much improved, jersey.

A final way to gauge interest over the LA Galaxy is to compare it with Premier League teams. While major teams generate easily interest of much higher orders of magnitude, the audience for the Galaxy (without Beckham) is comparable to the audience for clubs in the bottom of the EPL table, as Burnley FC or Leicester City FC (as shown by the graph).

The quest for (soccer) world domination is on.