Hey everyone! After an off-season that feels like it just breezed by, the buzz surrounding opening kickoff is palpable as we anticipate what could be the finest season in MLS history. The talent level is the highest the league has even seen, the Americans are coming home, the stadiums are rocking and the World Cup is right around the corner. Are you excited? I'm excited.

Especially when it all makes for an intriguing season of MLS Fantasy Soccer Manager.

Here at LAG Confidential, we don't want to overwhelm you with too much information. Different parts strategy, strategery and cheat sheet, the idea is to condense all the vital information you need into a few minutes of light reading each week. Let's get started, shall we? 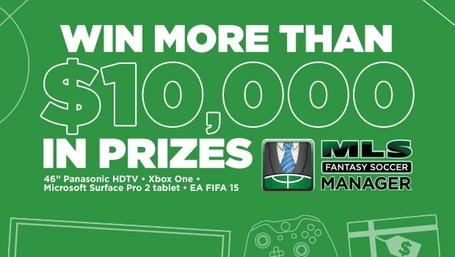 MLS Fantasy League is like any classic video game: Easy to pick up and play, difficult to master. The basic premise can be broken down into two overlapping strategies.

Picking players who will score the most points

How much stock you choose to place on one over the other every week is the lynchpin to success in MLS Fantasy Soccer Manager, and what makes the game so exciting.

So, how do you determine the right players to select? Research. Lots of research.

Obviously, this article isn't going to do all the work for you. If you want to be an elite MLS fantasy league trequartista, you need to be up to date on all the various happenings around the league. Watch every MLS game you possibly can, or if not, at least check out the highlights. Social media and the BigSoccer club forums are your friend. And of course, the MLS website has plenty of resources at your disposal.

Here are a few tips to help shape your opening day roster.

Differentials: Buy low and sell high. Basic stock market logic, right? More specifically, you're looking to find sleeper hits, the players with low ownership who have the potential to earn a lot of points, but for one reason or another are overlooked by most fantasy league managers. With injuries, suspensions, tactical adjustments, international call-ups and other variables affecting teams on a day by day basis, there will be plenty of opportunities to unearth hidden gems if you're savvy enough.

For example, look at Portland center back Norbeto Paparatto ($8.0).The Argentine off-season acquisition is owned by just 1.8% of managers, probably because he's new to MLS and hasn't yet played in an official league game for the Timbers, even though he's been playing with the first team during pre-season and is projected to make the starting lineup. By taking a small risk and putting him in your lineup, you potentially have a offensive minded starting center back on one of the toughest teams in league to break down defensively. Add in the fact that Portland plays their first two games at home where they don't give up many goals, and Paparatto looks like a risk worth taking.

David Horst ($5.5) is another center back that fits the bill. Less expensive than Paparatto, but more highly owned and less assured of a starting spot. On the offensive end, Mauro Diaz ($7.5) is another potential sleeper pick. The 22 year old playmaker impressed during limited minutes last season, and if his electric pre-season form is any indication, he looks poised to benefit from a club rejuvenated by the hiring of Oscar Pareja and several off-season moves, starting this weekend against an uninspiring Montreal side that leaked goals at the end of last year.

Cheap bargains: There's no getting around it: If you want a field a quality starting 11, you have to fill out your roster with bench spots. However, don't waste these pick on role players hopelessly down the depth chart, or others who have little to no chance of seeing the field. Use those spots on players with upside. High draft picks are inexpensive and have decent odds of seeing first team action. Thomas McNamura ($4.5) is all but guaranteed to claim a starting position for Chivas USA, while over in New England, Patrick Mullins ($5.0) is set to replace Lee Nyugen after the midfielder suffered a groin strain.

Sophmores are another attractive option. Will Trapp ($6.0) and Shane O'Neill ($6.5) are both cheap, talented, and ready for breakout seasons.

World Cup hopefuls: Mike Magee ($10.5), Maurice Edu ($9.5), and Michael Parkhurst ($7.5) are all going to be highly motivated to make an early impression this year, among others. With only a few friendlies left until Jurgen Klinsmann announces the World Cup training camp roster in May, for some of these players, the MLS season might be the last saloon.

And for pete's sake, read the rules! If you're a beginner, obviously you need to figure out how the game works, and for returning players, it's important you catch up on the new changes. No more automatic subs! This means you need to have your phone prepped and ready to go in case, say, Sporting Kansas City wants to rest Aurelin Collin and decides not to tell anyone, or EJ eats a bad Hot Pocket and has to sit out. Get the mobile app here.

Pick of the week: Kellyn Acosta ($5.5) Should start this weekend and an all-around wise investment. If FC Dallas can manage a shutdown against a Montreal team missing Marco de Vaio, his value instantly rises.

Strategery pick of the week: Brad Davis ($11.0) Ok, his price is too damn high. But every other metric available says you should pick him up: Consistent point scorer, playmaker, takes free kicks and penalties, looking to earn a World Cup roster spot, home field advantage, favorable schedule, etc. Or if you want to go with a slightly safer investment, go with Oscar Boniek Garcia ($10.0).