What would Los Angeles as a modern World Cup Host City look like?

In a recent article published on SB Nation Soccer, educated guesses were taken as to what a United Stated World Cup would look like if hosted in the near future. There are rumors the US may have to take over as an emergency host in 2022.

Share All sharing options for: What would Los Angeles as a modern World Cup Host City look like?

In a recent article published on SB Nation Soccer, educated guesses were taken as to what a United Stated World Cup would look like if hosted in the near future. There are rumors the US may have to take over as an emergency host in 2022, and if that doesn't come to fruition it seems clear the US plans to continue to trying to secure a second World Cup which promises to be a financial bonanza for all involved.

The SB Nation article, and indeed the actual bid to FIFA for a US hosted World Cup in 2022 lists Los Angeles as a venue under consideration for the opener or the final. That's a key venue in the whole of the tournament, but thus far a satisfying answer has yet to come out answering where exactly Los Angeles would host their World Cup matches. 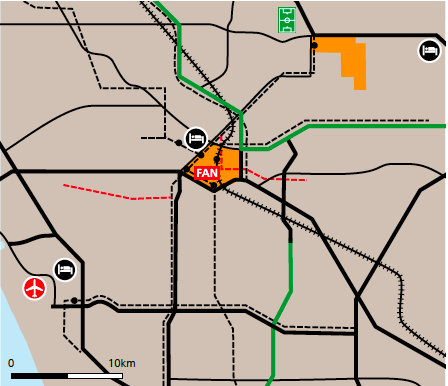 The above map appeared in FIFA's valuation of the US bid proposal for hosting the World Cup. We'll refer back to it several times, but for now note that the Los Angeles host stadium is the Rose Bowl. This was a long process, with the USA Bid Committee taking a stadium tour of the Rose Bowl and the City of Pasadena signing relevant documents to be selected as a Host City back in 2009.

What is also known is FIFA's requirement that Host Stadiums be all-seater stadiums. and that benches of any kind are not acceptable under any circumstances at the World Cup. The SB Nation article assumes like most folk do that Los Angeles will figure something out. I have to imagine that if the US submitted the Rose Bowl as a possible site for a final, that included some promise of filling the Rose Bowl with seats.

Rose Bowl Stadium capacity is currently listed at 92,542 spectators. The 2022 bid listed current net capacity at 86,009 and expected net capacity 82,809. I haven't been able to find the exact Los Angeles proposal, but I highly suspect that if expected capacity was 10,000 fewer seats than currently offered then conversion of benches to individual seats was a part of it. The proposal review states that all stadiums would meet FIFA's seating requirements, but in general would have to be upgraded.

So when picturing Los Angeles as a World Cup Host City, if you aren't picturing LA with a brand new NFL Stadium, picture Rose Bowl stadium without benches. Even without the World Cup, it's not hard to see the Rose Bowl going in this direction. Its peers are no longer the Yale Bowl and The Big House. The Orange Bowl, Fiesta Bowl, Cotton Bowl, and Sugar Bowl are all currently played in NFL Stadiums. The writing may already be on the wall anyhow for the Rose Bowl as a quaint old venue.

After the Stadium, the next tournament specific detail is venue specific team hotels and venue specific training sites. The US bid submitted well more than the minimum two hotels per city, the above map shows what looks like three for Los Angeles. All submitted hotels had to be either four or five star quality. It's noted that LA's offerings vary in quality, and that two exceed the maximum travel time.

Two of LA's hotels are reported to be airport hotels, so that's probably two hotels at LAX. The orange area is supposed to represent a city center, and the scale shows the Pasadena area hotel as 15 miles away. The downtown hotel should be fairly obvious. It's likely that'd be the FIFA headquarters venue, and the FanFest could be at LA Live.

The analysis goes on to mention that the LAX hotels exceed the travel time to the proposed training grounds. Both Los Angeles training venues are fields within the same sports complex with one the main stadium and the other an outer field. Best guess is one of those is the StubHub! Center. UCLA is often used by traveling European club teams, so that could be the other.

USA's 1994 bid got away with several things as the last World Cup where bench seating and standing was allowed, and with FIFA chomping at the bit to turn the US into a soccer market. The lasting effects of hosting that cup has the US now with a soccer culture that could properly appreciate hosting a second tournament. When that second tournament comes, FIFA won't be so generous. Upgrades will be expected in Host Cities, from the stadiums to the hotels to the infrastructure.

Simply, being Los Angeles won't be enough this time around.