The Galaxy have conceded 13 goals from corners and free kicks, three more than a Portland team considered very weak at defending set pieces. After an August match against Dallas where the Galaxy conceded three set piece goals, Landon Donovan said that set pieces are a mentality and last night Donovan said the same exact thing.

"It's a mentality. Defending set pieces is so a mentality. It's who wants the ball. Too often, guys have let down in that area. So, either you change who's marking or people don't play if they can't do that. That's sort of the harsh reality, but that's how it has to be. We can't keep giving up goals like that."

Against Dallas Donovan said it was a matter of pride, and here he seems to be calling out those not rising to the occasion. So let's take a look at Urruti's goal from a corner kick on Sunday. Here's the marking as the ball comes in near post. 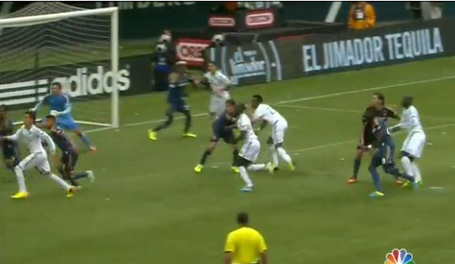 Urruti is running near post and he has two Galaxy defenders on him; Sean Franklin on the right side and Juninho on his left. Penedo is trying to get to the near post where Donovan is standing guard. When considering Donovan's comments, keep in mind that he saw the entire thing develop in front of him. 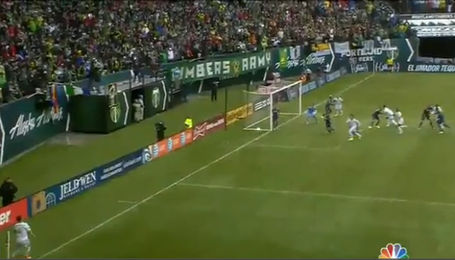 Here's the ball coming in. Sean Franklin at this point has been beaten and can do nothing to prevent Urruti from doing what he wants. Juninho will step up from his rebound clearing position , but he won't get there in time. Urruti will karate kick the ball between Donovan and Penedo, with too much pace and too little distance for Penedo to get an arm up in time. 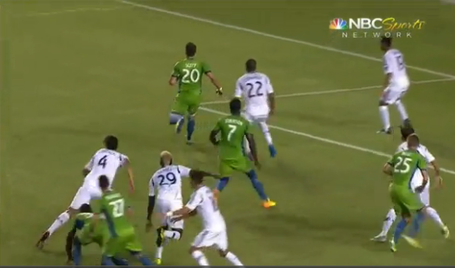 Here's the Eddie Johnson goal from last week. Omar Gonzalez was being held by that Seattle defender on the ground behind him so he's lost Johnson now all alone in no man's land. Zardes got caught in the pile-up as well. The only free person is Juninho but he's too far to make a play.

"It's really difficult," said Robbie Keane. "It's frustrating especially because we seem to be talking about the same stuff all the time, so another set piece; that's a killer. If we stop a team from set pieces, we certainly won't win every game, but for some reason we keep conceding set pieces which, at the moment, is certainly our downfall."

Rather than pointing to a specific player, I think what is apparent is an overall lack of urgency. As Donovan said after the Dallas match it's about pride and wanting the ball more than the player you are matched up against. In the Portland goal Urruti wanted the ball more than Franklin and on the Seattle goal there wasn't enough concern that one of the best at headed goals had just broken free.

"We wanted to come here and get some points," said Omar Gonzalez, "and now we've leaving with zero, but on the night I thought we were aggressive, we played really well. But out of really two chances, they scored on a set piece. So, we got beat by a set piece again which isn't good."

Despite getting no victories from the month of September, LA weren't bad from the run of play. It has to be frustrating seeing points left on the table due to set pieces, if it's on everyone's mind after the match.