Landon Donovan's performance against Philadelphia carried him to a second place finish in the weekly index despite a lackluster performance in New York. A breakdown of the two performances.

Landon Donovan unsurprisingly finished second in the Castrol Index for week 12, second only to Eddie Johnson's two goal and one assist player of the week performance. He still has a great deal of making up to do in the full list (he's currently sitting at 68), but if he keeps putting in performances like the one he had in Philadelphia that shouldn't be too great a challenge.

More: Landon Donovan has big Impact in win vs. Philadelphia

In our own Match Impact Rating, Donovan showed up with a 109.1 rating for his two assist one goal performance against Philadelphia. He didn't show up so well in New York, only managing a 29.5. Over the whole season, Donovan only trails Robbie Keane in MIR with an average of 44.2.

-Landon Donovan was second on the weekly Castrol Index

When I asked Castrol about their process, they pointed to all the positive events he had in the match against Philadelphia. To go with his goal he had a shot on target, both of which have benefits in the index. His passing was considered above average. He gave away the ball around the opposing penalty area on a few occasions, but had five successful passes into the box. Two of those successful passes into the box were assists. 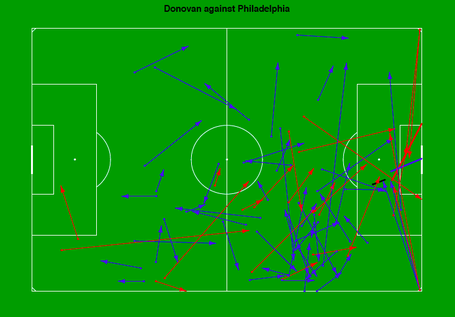 The map gives us a visual idea of how well Donovan played against New York. This imagine was given to us by Castrol, with the blue representing good events and the red representing negative events. The black bar is Donovan's goal, the blue bar (right in front of goal, doesn't have a point on it) is Donovan's shot on target. Certainly in the midfield, the blue heavily outweighs any giveaway and on balls into the box it's about fifty/fifty.

Only the two assists resulted in shots on goal, but his cross in front of the face of goal from inside the box and two successful corner kicks certainly created opportunities.

Against New York, things didn't go as well for Landon Donovan. His only shot was an off target attempt which has no benefit. He only completed two passes in the box, while losing possession in the penalty area once. One performance his distribution was great, and then it was followed up with not so great. 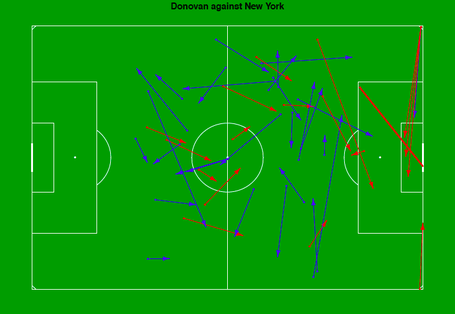 The New York map is certainly more sparse. Actions on the flanks are almost nonexistent, showing how much Donovan had to drift after injuries to Juninho and Mike Magee. It's good to see a player all over the pitch, but typically it's good to be able to tell what part of the midfield they started from. The actions in general are sparse, and when they get into the opposing penalty area the red outweighs the blue. The red bar represents his off target shot.

Comparing his stat points in the two matches, Donovan didn't participate nearly as much in the match against New York as he did against Philadelphia. He finished with about half as many events both successful and unsuccessful. It suggests a player who was tired, as his stats correspond more closely with a player who didn't play the entire match. 180 minutes in five days will do that to a player.

Despite playing tired in New York, Donovan's combined performances were good enough for second in the weekly Castrol Index. Even if they hadn't counted his goal and shot on target in Philadelphia, Donovan's performance there would have been better than how he played in New York. Goes to show how an outstanding performance can make up for a lackluster one the following time out.

Of course, it also shows how an outstanding performance can contribute to a lackluster one next time out without proper rest.

Thanks to the Castrol Index, Opta, and Patrick Johnston for the statistical information provided.