The LA Galaxy Academy youth teams are participating in the 11th annual Copa LA Youth Soccer Tournament this Memorial Day weekend at the Ab Brown Sports Complex in Riverside. The U-12, U-13, U14, and U-15 Galaxy teams are all participating in this tournament that features teams from throughout Central and Southern California as well as Arizona, Nevada, and Mexico.

On Saturday they had a very good day winning all their games. They're all in a position to make the semi-finals tomorrow. They're all contenders to take home medals in their own division on day one. 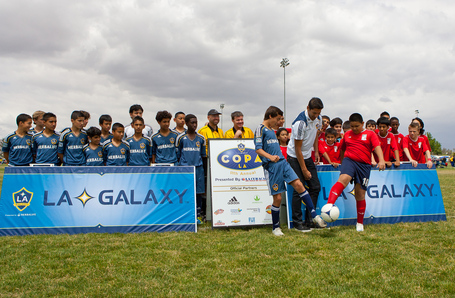 Omar Gonzalez was out there, signing autographs as seen in the lead photo and taking part in a ceremonial first kick as seen in the above photo. Great to see Gonzalez out there putting smiles on kids' faces as he continues to recover from his knee injury.

The Galaxy U-12's were the team to benefit most from the tournament. Next month they travel to Arizona to participate in the US Far West regionals, which makes Copa LA a great tune up tournament. The U-12's qualified for the USY Far Regionals by winning the Cal South National Cup in March. The tournament in Arizona promises a berth in the US Youth Soccer National Championships in Rock Hill, South Carolina.

Congratulations to all the LA Galaxy Academy youth players, and good luck tomorrow and Sunday!