Looking back at what US soccer looked like 100 years ago

One hundred years ago US soccer was founded to bring together state organizations and neighborhood based immigrant populations of factory workers. Its legacy lives on.

In one month the USSF will be celebrating it's 100th anniversary of its founding in 1913, and we're going to continue our "best in American soccer" series by taking a look at what the soccer landscape looked like in 1913. To understand where soccer stands today, we have to understood where it stood in the past. As John Green would tell you, history will help you better understand the world around you and make you a better lover. It's true.

(p.s. John Green if some how you end up reading this article, I love you forever) 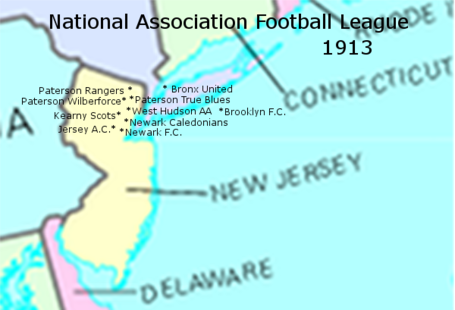 That's what top flight soccer looked like in 1913, not exactly a wide swath of the country. It's almost entirely in New Jersey, and judging by the nicknames it was almost entirely Scottish. East Jersey was an early Scottish colony, dating back to 1683, many coming from Glasgow.

It's funny that the New York Red Bulls now play in a stadium in Harrison, NJ, since West Hudson used to be the cradle of soccer in America. As the industrial revolution transformed the landscape of America, the old Scottish colony welcomed new waves of British immigrants who sought jobs in the new textile factories.

The Clark Thread Company started in Newark in 1866 and the Nairn Company Linoleum Company Mill opened twenty years later. Both were the American branches of established Scottish firms, making them doubly attractive to Scottish immigrants. Link

Harrison's West Hudson Athletic Association won the National Association Football League in 1913, their second straight title. However, the current home of the Red Bulls was not the only hotbed of immigrant soccer in 1913.

St. Louis was an Irish-American city, which is reflected in the names of the teams in its soccer league; St. Leo's was a Catholic rec team and Innisfails a Dublin rec club. Chicago also had its own association football league, with clubs like Pullman (a town founded by a railroad car company), Campbell Rovers, and McDuffs.

Point being, soccer in 1913 was quite regional, growing in areas with factories and immigrant populations. Even Los Angeles has a league, the Southern California Football League founded in 1902.

As is common, the various states all had their own football organizations, who used different methods to promote the sports and different rules to play it by. When it was founded in 1913, the USFA had seven different state organizations under its wing, and had to standardize game rules, communication guidelines and a system for transfers.

The US had already played in international competitions. Clark Field of the Clark Thread Company hosted Canada in 1885, the first full international match played outside the British Isles. The Canadians won that year, but the US won the return leg in 1886.

The USSF also formalized the National Challenge Cup (now the US Open Cup) to begin in 1914 as a method of finding players to play on a national team in international competitions like the 1915 Pan-American Games and the eventually cancelled 1916 Olympic Games in Berlin.

Conflict over the National Challenge Cup would later doom America's first attempt at a top flight national soccer league. The Open Cup still remains an opportunity for overlooked talent to make a name for itself, and is also a financial burden some MLS clubs would rather be without.

The other sports leagues at the time were dealing with similar issues. Baseball was big business at the time, with the National and American leagues established back east across multiple states. Still, the states without Major League Baseball were forming competitive regional leagues such as the Pacific Coast League, the American Association, and the International League.

American Football was in a state similar to Association Football in America. Leagues were regional in 1913, like the Ohio League. It's considered a direct predecessor to the National Football League, the same way the Jersey based NAFL was the successor to the American Soccer League, but was composed entirely of teams from Ohio towns like Massilon, Dayton, and Canton.

What hurt Soccer in those early days was its immigrant status. American Football at the pro level was played by men who had gone through the American college system, soccer was played by factory workers and their sons.

It's a space that soccer still occupies internationally. The great soccer clubs operate out of factory towns like Manchester, cosmopolitan capitals like London have struggled historically. It's a space American football occupies with teams like the Acme Meat Packing Company still alive and well, even though it's always been played by college students.

This falls into one of the old cliches about the two sports. "[Association] Football is a gentleman's game played by hooligans, and rugby is a hooligan's game played by gentleman". Rugby is named after a boarding school after all, and all the rules of American football were agreed to at Ivy League institutions.