Hey everybody! Like usual, lineups are due soon, so let's get started!

Here's the schedule for this week. 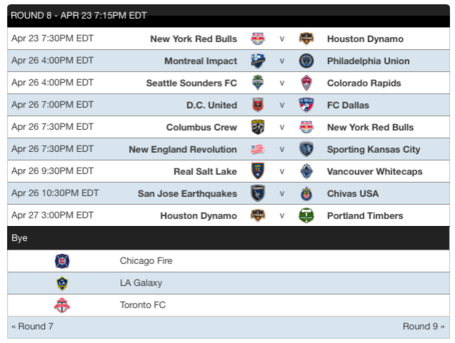 How many players with double weeks should you have in your lineup? It's tricky finding the right balance. Too few players and you run the risk of being outscored by your fellow managers. Too many and you are potentially stuck with unwanted players that can lower your score in future rounds.

A few rules of thumb:

Stick to players that are guaranteed to score at least 7-8 points: Defenders who earn bonus points are a good bet, especially center backs. Essential midfield starters as well. Anyone who's penciled in for 180 minutes is worth taking a look at.

Houston's roster is a mixed bag. They haven't been playing well, losing three of their last four, and with Ben Jata hinting that Brad Davis ($10.7) is set to miss today's match in New York, they may very well struggle on offense. On the plus side, Houston has a DGW in round 10 and Davis will be back by then, so expect an improved side.

David Horst ($6.1) should be in your lineup, but Jermaine Taylor ($7.6) is a smart pick if you need a second Houston defender. I'm not expecting Ricardo Clark ($7.3) to score, but he should earn enough points and is definitely the value pick up of the week.

Unfortunately for Red Bull fans, things in New York aren't looking too good at the moment. Similar to Houston, New York's offense is also sputtering, partly due to the continued absence of Tim Cahill, who will miss today's game with a nagging hamstring injury.

Sure the Red Bulls may have just won their first game of the season, but their fantasy choices just don't look that attractive. I recommended Lloyd Sam last week, who was able to score, the problem is, he's arguably the only Red Bull that produces offensively and is guaranteed to play 180 minutes. Eric Alexander ($6.8) may have had two assists, but his performance was probably a one-off. Luis Robles ($6.0) is another must-have if Tally Hall ($6.1) isn't already in your starting lineup: With more saves than any other keeper in MLS, he's going to get points.

Outside of Robles and Sam however, anyone else from New York is a stretch.

Addition by subtraction: Don't be afraid to take a few hits in penalties if you can significantly improve your roster in the next few weeks. If, say, you want to add a few Houston players to your lineup but don't quite have the cash, transfer out a third player you might not be interested in for someone with a DGW in round 10.

Don't go too far: Remember that for roughly the same price as a Oscar Boniek Garcia ($9.9) or a Jamison Olave ($9.3), you can pick up a Clint Dempsey ($10.5) or a Graham Zusi ($10.8), two elite fantasy league players that may very well score just as many points during the round. (Possibly more!)

Pick of the week: Jermaine Taylor ($7.6) The potential for double digit points makes Taylor a must have pick this round, and a shutout all but puts him in the Dream Team.

Strategery pick of the week: Will Bruin ($8.4) I got a hunch, ok? That's a technique by which many transfers outside of Beverly Hills get solved.