Even with the Union playing twice this week, Clint Dempsey is a must buy

Hey everybody! Lineups are due, so let's get to it! 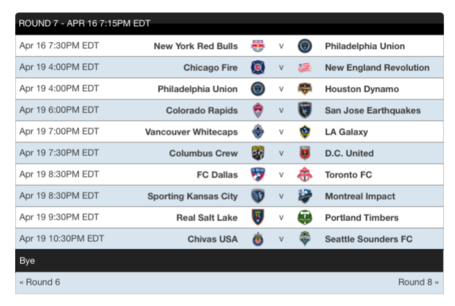 By now it feels like I've discussed Philadelphia to death, so here's a quick summary.

As Sean Connery would say, godspeed.

You need Deuce: I'm not 100% convinced Clint Dempsey ($10.3) is an elite fantasy league player just yet (He could use more bonus points), but 32 points in two games speaks for itself. And look at the Sounders' schedule: Away to a struggling Chivas side, followed by three home games and a double week in Round 10.

Be proactive with your transfers! Sometimes a calculated risk can pay off.

This week, I transferred out Robbie Keane ($10.9), who has to travel to Vancouver to play on what he calls "concrete", followed a bye next week, for Andrew Wenger, then used the extra funds to pick up Dempsey. Keep in mind a big reason I can make this trade is because I was prepared for the double week ahead of time.

If you have an extra transfer, I would recommend Lloyd Sam ($6.7) this round. Right now the Red Bulls offense basically revolves around the winger, who's been giving defenders fits so far this season. With New York playing twice next week, at the very least you're setting yourself up for more points in Round 8, and if Sam manages to score a goal or an assist, all of a sudden you look like a genius.

Pick of the week: Clint Dempsey ($10.3) Normally this would go to a Union player, but you should have enough in your starting lineup by now.