With MLS bringing home United States stars Clint Dempsey and Michael Bradley ahead of the 2014 World Cup, the marketing message for the 2014 season is clear: watch the march to Brazil as "It All Starts Here"

Share All sharing options for: New MLS Marketing campain: For club and country

With MLS bringing home United States stars Clint Dempsey and Michael Bradley ahead of the 2014 World Cup, the marketing message for the 2014 season is clear: watch the March to Brazil. MLS has used the March pun the promote First Kick in the past with the March to Soccer, but it's being taken to another level this season. The poster proudly declares for club and country, as more and more of the national team plays for MLS clubs. 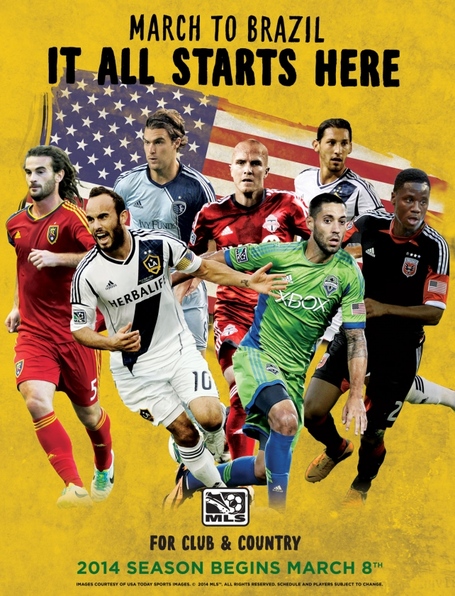 From adage.com, which ran an article today about MLS' marketing strategy, we see how MLS plans to get this message out:

A new print ad featuring MLS stars will declare: "March to Brazil. It all starts here. MLS. For Club and Country." There will be a billboard in Times Square. And a heavy dose of digital advertising on MLSSoccer.com and YouTube, plus sports sites such as SB Nation and Bleacher Report.

We made it, Nation! "It all starts here" replaces "This is soccer" as the tagline for the entire season. MLS over the past four years has gone from supplying four players to play for the national team to possibly over a dozen. Don Garber mentioned in comments yesterday how nationalist events like the World Cup and Olympics lead to viral events like Donoavn's 2010 goal to get the US out of their group, and the plan is to encourage those fans to tune in all year.

The ad age article also mentions MLS signing Kraft beverages as a sponsor. Now if only MLS could sign oranges as a sponsor, players will always be ensured orange slice and Capri Sun after games.