One of the ongoing debates of the LA Galaxy season is the play of Hector Jimenez and Michael Stephens. Much praise is given to Bruce Arena's ability to identity talent in the draft, but Stephens and Jimenez are the Galaxy's only players left from the 2010 and 2011 draft. Contract lengths aren't known, but at four and three years into their MLS careers there's risk of the Re-Entry Draft for both players.

What's needed is a breakthrough year, a reason to keep them on and not give up their roster spot to an incoming rookie; restocking the pantry. Replacing an injured Landon Donovan, last weekend's match against Real Salt Lake was a chance for Jimenez to make his case.

On the surface, Jimenez was impressive. He and Brian Rowe tied for the Galaxy's top fantasy earners last week, each with ten points. Jimenez had the assist on Charlie Rugg's goal, had three key passes, and two passes that created what MLS Fantasy considered big chances. He had nine clearances, blocks, and interceptions. Just looking at the numbers, I'd say Jimenez had a quite serviceable match.

The Castrol Index did not agree. Mike Magee (eight points, Fantasy) and Brian Rowe made the weekly top 20, but Jimenez was nowhere to be found. Looking at the full index, Jimenez has 96 points in 108 minutes. Comparable to Michael Stephens' 104, but half of Charlie Rugg's 203 or Greg Cochrane's 247.

I asked the people who run the Castrol Index about the play of Hector Jimenez, and they gave me the following statement: "He was quite good in stopping the opposition with ball clearances (3 successful) and by winning the ball back or intercepting (9 times) and he won 5 out of his 6 duels." So defensively as a midfielder, things went pretty well over the weekend.

"What his game lacked was creativity and productivity. 12 out of his 21 passes were incomplete, having only one successful pass into the opposition box and one more close to it." A completed pass rate of less than 50% is pretty bad. The lone successful pass into the box was his assist to Charlie Rugg, the one near the box was the play where Jack McBean fractured his collarbone.

Otherwise, Jimenez was one for five on crosses. Outside of those crosses from the edge of the box, Jimenez doesn't have a pass attempted outside of a bubble where the touchline meets the midway line. I'll put his pass chart and Mike Magee's side by side, it's really something. 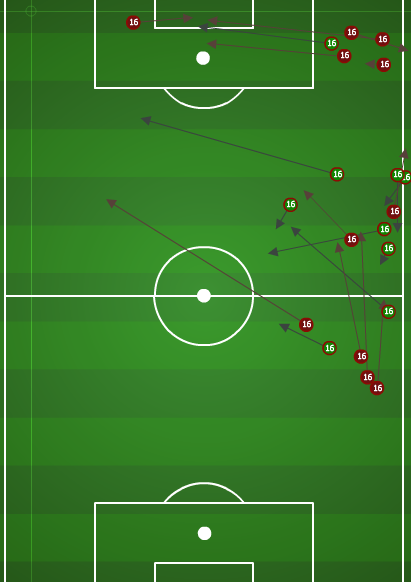 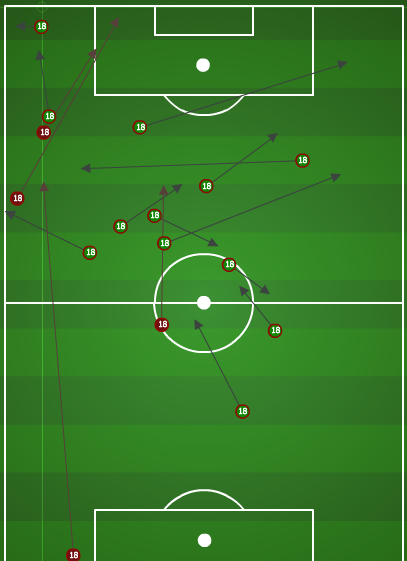 It's like Jimenez was tethered to the fourth official's table. A bit unfairly, Jimenez gets double penalized for those unsuccessful crosses because they cost the Galaxy possession in or around the opponents penalty box. The people at the index continue: " Overall his passing activity was below average taking into account also his position. Finally he had two shots off target (one on post, but cynically seen, this is not better than a non-post off target, although it creates more excitement), which actually give negative credit as it is equivalent to giving the ball away."

So Jimenez makes the shot after Gyasi Zardes does all that fancy dribbling and distributing, Jimenez comes out looking a lot better than he does. Jimenez' other shot was a header that went wide. Zardes, by the way, is the only Galaxy player who has earned points and is below Jimenez on the cumulative Index. Garcia and Meyer appear but have not earned points.

So on the one hand, he played well defensively and got possession for the Galaxy. However, once he had possession he had two tricks: the long pass from the sideline which worked twice and dribbling up to the touchline to send it in horizontally which only worked when Jack McBean did the dribbling.

There's no questioning Jimenez' work rate, the effort is there, but the index is right; missing on more than half your passes simply isn't good enough for a midfielder. The more I think on it, the more I feel Jimenez, like Stephens, could be better used on another team with lower expectations. Jimenez could very well be a Mike Magee, not blossoming until seven or eight years in the league. However, the Galaxy have a chance to restock the pantry with players that have bigger upsides.

I'll have more on what I'm inferring there in a moment (LA Galaxy academy player Paul Arriola signed with Tijuana Xolos), but it's worth reflecting on for a moment. Even in a match many pegged as a step forward for Jimenez, there's plenty of fodder to tear it apart.