The LA Galaxy have gotten solid play out of Marcelo Sarvas, who has gotten to start everyday for the first time under Bruce Arena.

Marcelo Sarvas was excellent for the LA Galaxy on Sunday. Juninho's star has risen so quickly in MLS, showing well in his loan stints with LA, that it sometimes dims the achievements of Sarvas in the midfield. Quietly, in his first opportunity to play every match for the Galaxy, Sarvas is showing why Bruce Arena went and made the transfer for him. 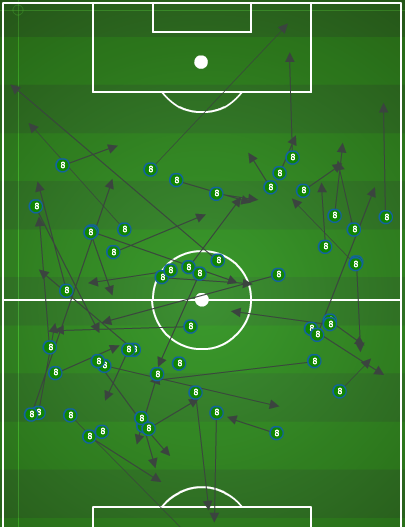 That's a chart of Marcelo Sarvas' beneficial events on Sunday. Look at how much space on the pitch he was able to cover. There isn't a shot on target, but fifty completed passes (including two into the penalty area) shows that Sarvas was the engine in the midfield. Eleven recoveries and seven interceptions also played a big role in keeping the clean sheet.

MLS fantasy players would do well to know that Sarvas is currently the LA Galaxy's top points earner in the midfield, now that Mike Magee is gone. Landon Donovan is catching up though.

Speaking of Donovan, the only player with more recorded events in the match on Sunday was Landon Donovan. His chart is proof that more isn't always better. His pass completion rate was 52%. Pulling in all successful and unsuccessful events, Donovan was about even. Even isn't good.

I'm focusing on the midfield here, but Robbie Keane was otherworldly on Sunday. Three goals is always going to boost the figures, but five successful passes in the box including the assist and the take on to get the assist looks really good. Gyasi Zardes had two of his own, it a good first MLS start.

Keeping the ball on the ground, and going through the middle with Sarvas and Juninho is an attacking strategy that has worked well for LA thus far this season.