LA Galaxy vs. Real Salt Lake: Does regular season mean anything in the playoffs?

The three match Western Conference regular season series between the LA Galaxy and Real Salt Lake saw RSL host the match twice but LA still come out the victor twice. Do any of the lessons from those three matches hold up in this upcoming series?

Share All sharing options for: LA Galaxy vs. Real Salt Lake: Does regular season mean anything in the playoffs?

The Western Conference regular season series between the LA Galaxy and Real Salt Lake saw RSL host the match two out of three times but LA still come out the victor twice. On aggregate a 7-5 win for LA, the series saw plenty of goals and for the Galaxy plenty of lineup change. Let's see if there's anything to take away from what was.

Mike Magee and Charlie Rugg were the goalscorers here. As neither of them look to feature in this upcoming series that's not much help, but it's worth noting that at this point in the season Magee had already moved back to the midfield. Even with his hot start playing up top, Arena chose to put Rugg and Jack McBean in the starting forward shots. Magee found the back of the net anyhow.

Gyasi Zardes has taken over Magee's left midfielder position, and the right midfielder quandary still hasn't been solved. Hector Jimenez had an assist and two key passes, which was almost a turning point. Jimenez' overall contributions were still marred by sloppy overall play. Michael Stephens has been the favored starter there in October, but Robbie Rogers' return from injury has shaken things up again.

This was also the match where fans learned that Brian Rowe had some talent as a backup keeper.

The Galaxy visited Salt Lake again in June, with a less positive result. This game fell into the "LA gives up late goals to surrender points" narrative with Olmes Garcia coming off the bench to give RSL two goals after the 80th minute in what was to that point a 1-1 draw. Javier Morales fed Garcia on both of his goals.

Again Brian Rowe started in goal, and Arena changed things up with a 4-3-3 as the Galaxy had to play this one without Robbie Keane. Landon Donovan scored the lone goal for LA:

The 4-3-3 never really became a thing, and didn't really play out in the match either. It was in response to Rogers and Keane being unavailable, but soon Zardes would find his place in the midfield. Strangely not only was Brian Rowe the starter in both Salt Lake matches but Greg Cochrane started in place of Todd Dunivant who has had to battle to stay fit this season. Tommy Meyer also stood in for Omar Gonzalez in this match, and this makeshift back line was exposed by RSL late with both Garcia goals splitting A.J. DeLaGarza and Greg Cochrane.

Finally Robbie Keane got to play against Salt Lake, and he came up with a hat trick. This was the start of Jaime Penedo's reign in goal, and also part of a period where DeLaGarza would start in Sean Franklin's spot and Franklin started in the midfield intermittently. Zardes at this point had secured his spot in the midfield.

LA went unbeaten in August with their new goalkeeper and the Donovan and Keane combination at it's peak. While their partnership got the lion's share of the love, Juninho's massive contribution was often overlooked due to him not showing up on the scoresheet, but his passing and defensive play was the key the LA's success. 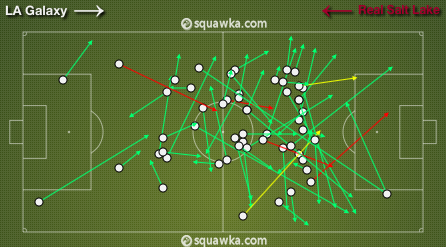 For those not familiar with squawka's passing maps hose greenish-yellow lines are key passes (both coming from the midfield where he spent most of his time) and those rare red lines are unsuccessful passes. Only one missed pass in the final third, and just an incredible work rate in the middle. There's a line across the pitch that looks like a city wall from the middle ages, and it's easy to imagine Juninho atop that wall yelling "You shall not pass!".

If LA is going to get their desired result against RSL tomorrow, it's going to take a great performance from the central midfield of Juninho and Sarvas combined with solid finishing from Keane and Donovan. LA has lived through the middle for years now and though teams have gotten better at countering it, that battering ram of central players continues to be the way the Galaxy break teams down.

The season series as a whole is a testament to how turbulent the season has been, but with everyone back these are two great teams with a ton of respect for each other.