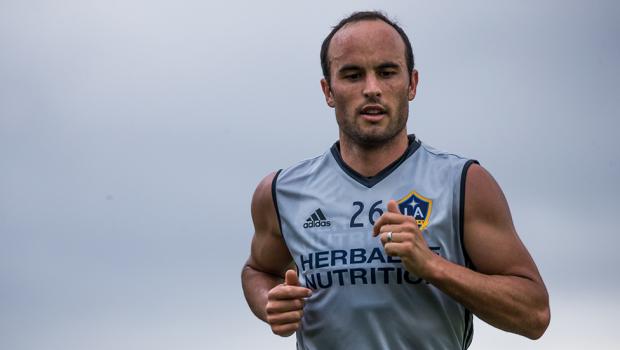 Good or bad, he's back... till he leaves again. Photo credit: LAGalaxy.com

In December 2014 a resolute 32-year-old Landon Donovan spoke vaguely of his next series of life goals, (marriage, family, college, travel), the indignation of a tumultuous year slowly washing over him. He was sure that his life as the great American soccer hero was over and he embraced the adulation and adoration of a world bidding him farewell. Yet two autumns later, he abruptly returned to the game he had a love/hate relationship with, and most of us embraced his decision, selfishly out of a greedy need for times long gone.

We all have a secret wish: to get a do-over. But we live in a world of linear rules. However there are a select few who manage to usurp those traditions, instead forging a lives where boundaries are pushed, second and third chances are permitted, where others tiptoe, fearful of shattering the glass house carefully holding those artifices together. In order to accommodate, others lives are necessarily disturbed. Everyone within that system is complicit. Athletes of immense stature are often centers of these constructed universes and their mistakes are more readily forgiven, their tantrums are forgotten and their elite talent supercedes everything. We hold these idols to a standard that is impossible for most humans to maintain. We also make it impossible for them to feel comfortable manifesting flaws. When they inevitably do, we make excuses or simply ignore it.

Donovan's tenure as the all-American face of soccer had many twists and turns, most notably when it reached its uncomfortable conclusion in 2014 as his national career officially ended on May 22nd (minus a friendly match in October) while his league career kept charging through a ceremonial goodbye tour across MLS. As awkward as it was, his complex relationship with the game he was so naturally gifted at began long before. One of his first tastes of the dark side of fame came after the deflating 2006 FIFA World Cup. Afterwards, he went through a three-year marriage, rumors of a love-child, a divorce, coped with depression, moved abroad, all the while knowing his life was viewed through a very public microscope. Upon returning to the States, he fluctuated between being one of the most intellectual players in the game and one of the most instinctive, a balance hard to attain. His hyperactive mental game was a source of both his power and his pain and his friend and mentor, Bruce Arena accomodated for the nuances of his unique player. There was a public understanding that fairly or unfairly the expectations on Donovan through his soccer career were high because he was bestowed with the talent to lead the game to a respectable level in this country. He was the reluctant face of soccer in the U.S.

A discussion of Donovan is not complete without mentioning his ongoing public battles with the current head coach of the U.S. Men's National Team, Jurgen Klinsmann. They reached a stalemate this June during the Copa América Centenario. But in 2014, Donovan's response to rejection by Klinsmann was less graceful. He transitioned from being the face of U.S. Soccer to becoming one of its loudest critics. After Donovan was left off the 2014 USMNT World Cup roster, a line was drawn in the sand and everyone took sides. You either believed Jurgen snubbed Donovan out of a personal grudge from his failure in Bundesliga and/or for taking a sabbatical, and that Donovan deserved the call up for his dedication to the sport, OR you sided with the new coach's German tactics that questioned the U.S. system and lack of soccer culture. Landon, an athlete who readily admitted to needing to live his soccer life on his own terms did not fit in with Klinsmann's style of coaching and he was certainly not at his 2010 level of play. Klinsmann's impression of Donovan was understandably affected by his self-induced absence from 2011 friendlies the USMNT right after Jurgen's tenure began. And then there was the controversial hiatus that led Donovan to Cambodia was during World Cup qualifiers that might have been the final nail in the coffin. In the coach's perspective, Donovan's self-interest was taking a more substantive role than his responsibilities to the team.

The resulting forced retirement from U.S. Soccer was probably for the best. No one truly wants a pity final World Cup that might backfire (i.e. Abby Wambach who played little part in the brilliant USWNT 2015 Women's World Cup performances). Jurgen Klinsmann was not like Bruce Arena or Bob Bradley. He was no-nonsense. Jurgen sought fresh talent and a system of accountability and seriousness. He did his job in spite of the backlash from more senior players who openly resisted such regimen. Donovan did what was left of his job too and took his path to the Galaxy's 5th MLS Cup, but it was not a professionally smooth exit. The repercussions reverberated long after his retirement. An astute wordsmith, Landon was always aware of the resonance of words spoken with proper timing. He knew when and where to strike, and he had a new platform as an analyst. He called for Klinsmann's firing in October 2015 after the Confederations Cup playoff loss to Mexico and again in March 2016. "If you can't beat Guatemala at home in a World Cup qualifier then you probably shouldn't be the coach. It's as simple as that," Donovan openly announced before continuing on to criticize Klinsmann for not using a stable lineup. The soccer world became super-saturated with an unhealthy imbalance of unproductive anti-Klinsmann rhetoric. There was an abundance of judgement but few solutions being offered, if any. Once the U.S. was able to reach the Copá America Semifinal against powerhouse Argentina, clearer heads prevailed. A truce was drawn.

"Jurgen and I had actually had a really good meeting before the Ecuador game and sat for a few hours and talked about a lot of things," Donovan said. "I’ll keep that private, but it was very good. And I think we have come to a place where we both can move on from it. It wasn’t an easy time probably for either of us, but we both realized that life goes on and that if we’re both going to be involved in this sport we should have a relationship. And so we are on good terms, and I expect it to remain that way."

Separating the man from his contributions to the game is difficult through the goggles of glory that media and fans crown him with. After all, he holds the goals, assists and now playoffs assists records in U.S. Soccer and MLS. Add on six MLS Cups and the fact that he could very well grasp a seventh, just four months after returning to LA Galaxy, and he's wrapped in an impenetrable holy soccer cloak. He's accomplished a lot in the past two months by many standards, especially for a 34-year-old athlete who was struggling to make a completed pass on September 11th. Or, consider the more likely alternative that he has been trained properly by one of the best coaching staff in MLS, incrementally being reintroduced to something his instinct is familiar with and it's a coincidence that the Galaxy are looking sharper than they have in over a month because it's playoff season and everyone's performance levels are enhanced. Since the bizarre departure of Nigel de Jong, it was natural for fans to search for an answer and a distraction. Enter Landon Donovan. More questions ensued. Who called whom first? Was it planned? The questions fell by the wayside out of convenience and more pressing issues. All of a sudden the conversation took a deferential turn towards the human tendency to find a hero. Where better than in someone who was already once given that title?

But is it fair to shine the light away from the new generation of players and place such a burden back on Donovan again, who himself has admitted to not wanting it? The responsibility and honor of winning the MLS Cup, in their Race for Seis, should rightfully belong with the team who has been in place since the start of the season, not with a retired player that was signed so close to the cutoff date. Landon's return came at a convenient time. It shifted the focus away from a team that was struggling with leadership as a result of injuries and/or contract issues with three of their four biggest stars, Gyasi Zardes, Robbie Keane and Steven Gerrard. It must have helped bring about a surge in ticket sales and fanbase morale. Around that same time, the Galaxy's other DP and the new number 10, Giovani dos Santos, was coming into his own, netting his best ever month with 5 goals and 4 assists. How much of the spotlight was shifted off him in that time? In spite of the adulations of the MLS community, winning him a Player of the Week award, he was not voted the Player of the Month honor (that went to Chad Marshall). Other players coming through the ranks of LA's deep roster haven't gotten enough chances while the roster makes room for Donovan minutes, like last year's Los Dos goal-leader Ariel "goal puppy" Lassiter (only 3 appearances this year one of which was 1 minute), homegrown players Jose Villareal (who never really got a chance outside of Los Dos), Raul Mendiola (who played many minutes but still likely lost some as a result of Landon's return) and Bradford Jamieson IV (we haven't seen him with the first team since April). In the long run, the risk is not worth it. In the short run, maybe the playoff run will reach deep past the next round with the Colorado Rapids, and maybe part of that will be because of Landon Donovan's experiences in intense situations. Those are lessons that have to eventually be learned by the homegrown players.

At least one person is being selfish here and it's coming at the cost of others' rights to build their own careers and potential legacies. Donovan has already had his moments. To take the moments from the new team that must necessarily form is only postponing the inevitable. He will retire again and who knows for how long. In the meantime, the man he once berated with vengeance has some advice only a coach can give with such certain insight.

"There's no better thing in life than kicking the ball around, then playing. Every time a player kind of comes to me and asks, 'When is the right moment to stop? What should I do?' I always tell them 'Go as long as you can, because these days when you played the game are not coming back anymore, so as long as your body is going strong, keep playing.'" - Jurgen Klinsmann.