Dallas 'Til I Die, or the next few weeks at least

Still reeling from the CONCACAF Champions League beatdowns this week? Yeah, me too. (Naturally if you're a hardcore enough MLS fan to play fantasy league, you probably know MLS went 0 for 3 against Mexican clubs in the region's club competition)

Not that I'm too upset. Never mind the other valid reasons, until the league figures out the scheduling conflict that pits mid-season Liga MX clubs against rusty MLS teams, it will continue to be impossible to have a fair shot against the Mexican clubs.

Anyway, lineups are due early tomorrow morning, so let's get started.

Here is the schedule for Round 3. 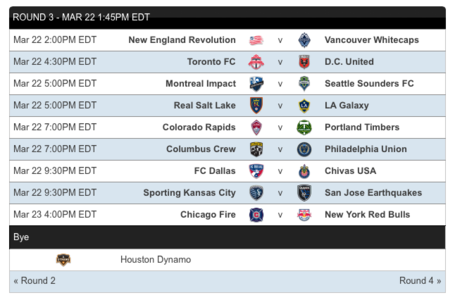 Actually, there aren't many sure picks this week. Lots of even match ups, with the exception of Toronto hosting D.C. I'm also intrigued by Chivas USA battling FC Dallas on the road, a game with the potential for lots of goals.

Dallas 'Til I Die, or the next few weeks at least: So far the early signs for Oscar Pareja's new look FC Dallas are positive, and with four of their next five games at home, you need a few of their players in your lineup.

Matt Hedges ($8.5) is one of the league leaders with 32 CBI's and a dangerous threat on set pieces, heading in the tying goal at Sporting Kansas City last week off a Michel free kick. Ideally you want center backs who consistently score bonus points in case the team doesn't record a shutout, and Hedges is one of those center backs.

As I mentioned during round 1, Mauro Diaz ($7.6) is another smart pickup. The FC Dallas playmaker is going to get lots of chances to score points next month, and is available at a bargain price.

Are Chivas USA legit? Possibly. They sure appear so, despite the advantage of playing the first two games at home. Mauro Rosales ($7.8) is a rejuvenated figure in Southern California, running with an extra spring in his step while also acting as a valuable mentor to the younger players. And he's producing too, leading the league with 3 assists and 8 key passes.

I was a fan of "Cubo" Torres ($8.0) last year, and so far this season he looks just as potent with a stronger supporting cast. Now, their defense is bad, so Chivas USA are going to give up goals, although luckily that's not such a bad thing for fantasy league purposes.

The question is, can they win on the road? If Rosales produces tomorrow, buy him ASAP before his price rises.

It's a Bloody Big Deal: Every time I read that now infamous headline, it's hard not to see a gleaming knife cutting into a juicy piece of prime rib, a visual which possibly doubles as a delicious metaphor for tomorrow's game.

As Ben Olson puts it, the hype is real.

During last week's nationally televised match in Seattle, Michael Bradley ($10.0) put in a commanding debut performance. The former AS Roma man was all over the field, intercepting balls left and right and putting the ball in dangerous areas, seemingly always at the right place at the right time.

Conventional wisdom says you normally shouldn't spend that much on a defensive midfielder, but Bradley is a special player and a class above the competition. When you think of him as a potential upgrade over Kyle Beckerman, Michael Bradley doesn't seem all that expensive.

And of course, with two clinical finishes, Jermaine Defoe ($10.7) is a must pick.

Overshadowed somewhat by the hype of the game was the revelation that TFC put together a solid defensive performance, one that basically shut the Sounders attack down. Julio Cesar ($6.0) only had to make a single save. Doneil Henry ($6.5) earned three defensive bonus points during the game, and if Toronto can manage to post a few shutouts, he could be another sleeper pick.

On the offensive end, Alvaro Rey ($6.5) was dangerous in possession on the right wing, almost scoring in the first half and making Dylan Remick look silly on a few occasions.

Pick of the week: Jermaine Defoe ($10.7) This round, you should go with the obvious choice. There's no guarantee he's going to score, but if you don't have the forward in your lineup, you're asking for trouble.

Strategery pick of the week: Jonathon Osorio ($7.1) With Jermaine Defoe and Michael Bradley receiving most of the focus from opposing teams, their presence makes it that much easier for the offensive midfielder to operate, much like when he first created space for himself before playing a clever behind the shoulder pass to Defoe for his first goal in Major League Soccer.