Whether its a huge success or a colossal failure, the second team in New York is a natural part of every league's evolution. It's the stake in the ground which tells competitors, we've taken the capitol.

This morning's announcement that MLS will be expanding to a second New York franchise has begun the transition from news to opinion. There are so many varying opinions out there it can be hard to filter out the noise and experience what's really going on. I hope you can trust me, as I try and come to my own opinion about what was just dropped.

"We proudly welcome two of the most prestigious professional global sports organizations to Major League Soccer," said MLS Commissioner Don Garber. "This is a transformational development that will elevate the league to new heights in this country. The New York area is home to more than 19 million people­, and we look forward to an intense crosstown rivalry between New York City Football Club and the New York Red Bulls that will captivate this great city."

The National League (baseball) of 1876 had a New York club named Mutual of New York. The City of New York hosted the announcement of the new league, but the city also lost their franchise that same year. Seven years later, the New York Gothams (later Giants) were formed. The American Association directly competed with the NL, but when it folded in 1891 the Brooklyn club (later Dodgers) would join the NL.

When the American League chartered in 1901, it took the space left by the American Association. The AL had formerly been a western minor league (west being a relative term), but when they went major the Baltimore Orioles would move to New York to become the New York Highlanders (later Yankees).

Major League Soccer doesn't currently face a credible threat. The New York Cosmos are throwing a lot of money around with splashy stadium designs, but have shown no desire to do things MLS' way. However, MLS knows the NASL is not a friend.

It was the motivation behind going after USL-Pro as a partner and not the NASL. It's the motivation in getting New York City FC together. It effectively nullifies any big league plans the New York Cosmos and the NASL have for soccer in the US.

What made the American League, American Football League, American Basketball Association, and the World Hockey Association competitors was money. The owners in those respective leagues all showed the ability to get talent to sign with them and not the established league. MLS has not seen that from a competitor to date.

Were something like that to happen, it would completely ruin MLS' business model. The entire point of MLS' single entity structure is to grow at a conservative pace. Competition requires overbidding, it raises prices faster than either side would like them to.

One can even argue that this kernel of truth accounts for MLS' aggressive expansion just a few years after contracting two teams. The other thing competition has done historically is forcing leagues that wanted to stay small to expand coast to coast. 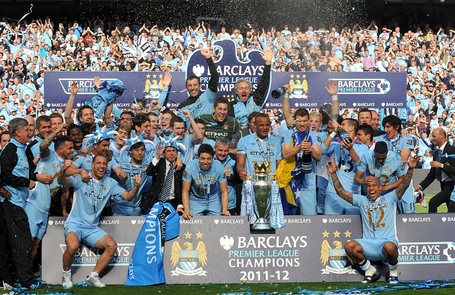 We're starting to get to the other side of this coin: what do Manchester City and the Yankees get out of this deal. One thing MLS has also shown is intense brand control. It's why MLS holds the trademarks to fan created trophies. It's why MLS has gone with one uniform supplier instead of several.

In the case of Chivas USA, MLS allowed an established foreign brand to take over a franchise. While the badge of Chivas USA is based on CD Guadalajara, the overall look of the club folds in well with MLS as they're an adidas club. Manchester City is a Nike club, which brings up an interesting issue. Who controls the elements of a brand? Can New York City FC don sky blue kits with adidas three stripes on the shoulder? Would that violate Nike's control of the Manchester City brand elements?

Austrian energy drink company Red Bull has three Red Bull Arenas around the world. One is in Austria where FC Red Bull Salzburg play, another in Germany where RB Leipzig plays, and the one in New Jersey. Red Bull puts a lot of money into getting people around the world to associate activeness with Red Bull. So what do the Guadalajaras and Manchester Citys of the world get out of the arrangement?

Clubs like Manchester United and Real Madrid have become worldwide brands by virtue of winning, and spending money to tell the world about the winning. As a result you can go to just about any country and find a Manchester United jersey. Manchester City doesn't have quite the cachet that United have around the world. It's one of the things the owners want.

Returning to Garber's statement above, traditionally New York clubs were great rivals. The Giants and Dodgers were always at each others throats over the National League pennant, and both clubs had World Series appearances agains the mighty Yankees. However the Yankees had Ruth and Gehrig and DiMaggio and etc. The Yankees won, a lot.

Then the Giants and Dodgers moved out west, bringing their rivalry with them. Rivalry between the Mets and Yankees came to a head once in 2000, but otherwise the Mets haven't been successful enough to be a competitive rival.

Otherwise the known rivalries are with other cities: Yankees-Red Sox, Mets-Phillies, Football Giants-Cowboys, etc. The common thread in all of them is being in the same division. It's a strange brew that makes rivalry. Competition for the same thing and proximity both play a part.

So much analysis relies on market size and the like, and certainly it's easier for a competitive team in New York to be profitable than a competitive team in Tampa Bay. However, there are plenty of examples of small market success out there. Sustainable is also quite helpful, no one wants the Florida Marlins.

Beyond all the pomp and circumstance, there really aren't details yet. The opinions are all being formed of a concept, and one that everyone has known was coming for awhile. MLS will have a second team in New York. Given the history of sports in America, nothing about that is surprising.