Anatomy of a Goal: Omar Gonzalez' goal from the referee's perspective

There was a seminal moment in the LA Galaxy vs. Seattle Sounders match, Omar Gonzalez' goal that wasn't called, from with the rest of the match was defined.

Share All sharing options for: Anatomy of a Goal: Omar Gonzalez' goal from the referee's perspective

There was a seminal moment in the LA Galaxy vs. Seattle Sounders match, Omar Gonzalez' goal that wasn't called, from with the rest of the match was defined. It's why Keane's goal was an equaliser and not a match winner, and the outrage over the non-call led many to want an explanation. It wasn't given that night, but PRO Referees issued their finding this morning.

The focus of the PRO article is on referee position. While some fans certainly would rather get an apology from PRO on missing the call, the article sheds some light on some of the difficulties in being a referee. To start the play Mark Geiger is at the top of the box looking for fouls, while assistant referee Gregory Barkey is with the last defender looking for offside. 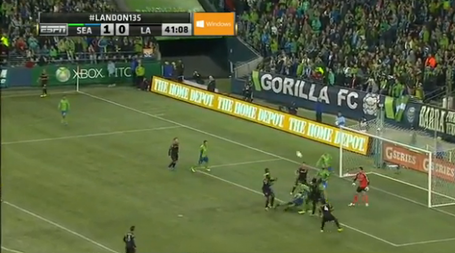 As the ball comes in, Michael Gspurning comes up to punch the ball away, but when the ball tails away from the back post toward Omar Gonzalez Gspurning is stuck. In coming up he's made himself the second to last defender, so the AR came up with him. This allows him to see if anyone strays offside (fun fact, they didn't) but puts him out of position to call the goal. 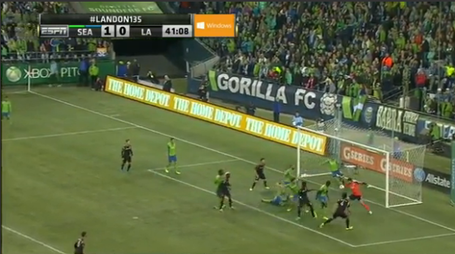 Coming out and then trying to backtrack is what puts Gspurning out of position and allows Gonzalez to head the ball past him. The last Seattle defender has tracked back into the goal to clear the ball off the line, but even in real time from the press box camera it's clear that the ball bounces over the line before he connects with it.

It's completely within the real of reason that an inexperienced assistant referee finding himself out of position on a quick play didn't want to override the head referee on a play which in real time was bang-bang. As a fan or analyst watching the replay it becomes obvious, but this is something goal line technology would take care of.

It's not a cop-out to say the AR had to move up to see a possible offside call. Robbie Keane started the play near an offside position, and had Gonzalez' header gone to Keane instead of past Gspurning that would have been an important call.

Keane's equaliser ultimately restored order, but while Omar Gonzalez had a perfect view to the proceedings it appears the referee's didn't. The fact that Taylor Twellman had a better view of the goal than Mark Geiger should reinforce just how important goal line technology is.

Garber was adamant that he wanted MLS to adopt goal line tech as soon as it was available, but once it hit the market and had a price tag Garber backed off quickly. Cost is a legitimate excuse for a fledgling league still trying to find its footing in the US. It could have been the difference between playoff seeds for LA, and that affects bottom lines as well.