On May 5th at The Home Depot Center, before the LA Galaxy vs. New York Red Bulls match, adidas held an event to launch their newest soccer cleat; the Predator Lethal Zones. This is the twelfth version of the Predator, first released in 1994, which is defined by five ball control zones on the toe of the cleat made from super-light rubber and memory foam.

The UK release of the cleat happened on May 1st in Manchester, which is where the lead photo comes from. The day after defeating Manchester United to take the lead in the EPL race, Nani and crew kicked around some balls for the camera. The US launch just featured us reporters, but Kenny Cooper and David Beckham were supposed to be wearing this new Predator in the match that evening. Unfortunately, all the photos of Beckham have him wearing last year's adiPower Predator. 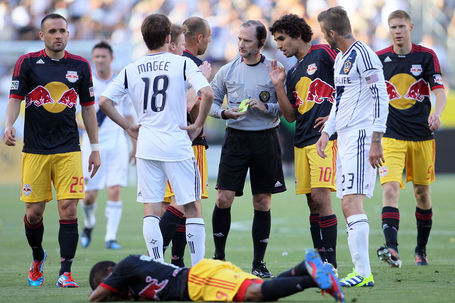 If you recall, Beckham had a special version made with his children's names on the right side as seen here. The big innovation on the 2011 version of the Predator was 'the Predator element', slightly raised silicon that served for better ball handling and making the boot more accurate.

Beckham not wearing the new Predators put a bit of a damper on my plans. Kenny Cooper was also on the radar for possibly rocking the new cleats, and even has a quote in the press release:

"In Major League Soccer, every touch on the ball matters and matches can be decided by a pass too short of a shot too long," said New York Red Bulls forward Kenny Cooper. "The Predator Leathal Zones provides ultimate ball control on the field and gives me the confidence I need when it counts."

So perhaps we can find a picture of Cooper rocking the new cleats: 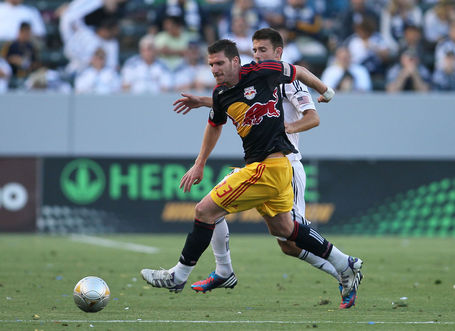 I'm honestly not sure what cleat Cooper is rocking, but look, behind him! It's Tommy Meyer wearing the new Predator Lethal Touch! The zones are marked with infrared, so they certainly stand out, and the shoe fades from bright blue to navy with white three stripes.

So how did my test go? Well certainly I showed some signs of rust. In the first touch zone my first touch went about ten yards away, and after I chased that ball down I hit the ball with the wrong side of my foot. Which was my concentration problem and no fault of the boot. 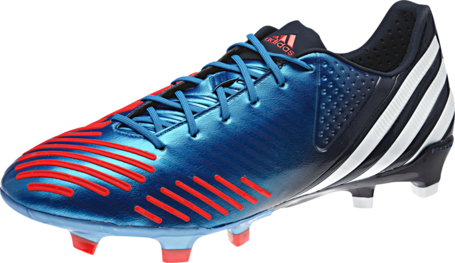 You'd think, with a large white ball and a boot marked with infrared zones I could concentrate long enough to put the proper part of the boot on the ball. Alas, I made plenty of mistakes. If any video crops up on youtube I'll be sure to share it.

However, comfort was top drawer, and they really felt like I was barely wearing anything once I got going. I was able to manage some nice touches, and even put some spin on the ball, once I managed to concentrate hard enough.

Look for Beckham and Tommy Meyer and perhaps others on the Galaxy to sport the new Predator Lethal Zones over the next few matches. It goes without saying that in a game played entirely with ones feet, the cleat is a terribly important piece of equipment. Y'all know I'm a bit of a uniform geek, I hope to be bringing you continuous updates on what the players use on the pitch.

As icing on the cake, these new Predators are micoach compatible. If you haven't heard about micoach yet, check out this video, and hopefully I'll be bringing you further updates on the micoach's many uses.