As you all know, I spent my afternoon last Saturday testing out adidas' new Predator Lethal Zones and then haven't shut up about them all the last week. My hope has been not just to shill for an MLS partner, but to give some insight into the most important piece of equipment for a soccer player. I also find the shoe sponsorships fascinating. David Beckham and Landon Donovan are teammates on the Galaxy, but have been with their respective shoe companies even longer. While athletes may jump from club to club, their outfitter and their agent typically stay the same.

So this is another in my series of stories about the story behind the match. The focus today is again on the adidas Predator Lethal Zones. After launching in Manchester, UK and Los Angeles, US last week, the Predators factored in on important goals for both sides. You can see in the lead photo that after sticking with the 2011 adipower Predator for last week's match at The Home Depot Center, David Beckham broke out the Predator LZ's with his own custom color way for the match on Montreal's turf.

They're more pink than I expected. When I was told they were pink and white, I imagined a pinkish white cleat with pink accents. I didn't realize they meant pink as the main color. I'm still learning shoe talk, but the standard Predator LZ is Bright Blue/Navy/White/Infared. So Beckham's would be something like Pink/White/Black. A closeup of the boot during the Galaxy match last night showed that once again it's engraved with his children's names on the inside

You can see a few of the boot's features in the lead photo. There's the drive zone that goes all up front of the boot on his firmly plated left foot. The photo is from Beckham scoring the equalizer, you can see he's struck the ball with the side of his big toe on the right foot and then followed through out to the right. This gives the ball it's spin, which made it dip just inside the top inside cover of the goal. 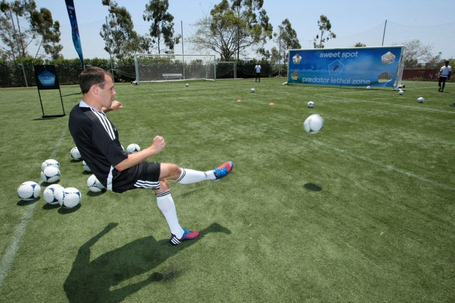 That's one of the marked zones on the Predator LZ, the sweet spot. You can see the sweet spot being demonstrated for the media at the cleat's launch last Sunday, and while Beckham's form is certainly better looking, you can see the feet are positioned in pretty much the same way. The goal of the drill was to get the ball inside one of the four open holes, which is best done like Beckham did, with a spinning dipping ball. But don't take my word for it:

The sweet spot was described to us as high risk, high reward. It was one of the athlete suggestions the designer was unsure of, but he was told time and again that was where you'd strike the ball for that bending shot. It can just as easily end up in the stands if it's not struck right, but as Galaxy fans have seen time and again it looks quite pretty when done properly. Now you know how to bend it like Beckham. 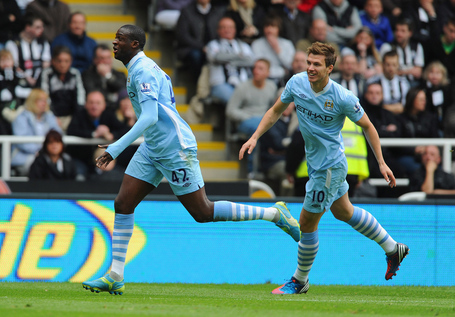 There was a goal scored in the EPL with the Predators as well. Edin Dzeko of Manchester City scored a stoppage time goal in them as City locked up their first EPL title in 44 years. Of course, City played a friendly against the LA Galaxy last summer so clearly the key to winning titles is to associate yourself with the Galaxy. Congrats City!