Share All sharing options for: A Look Back At Home Depot Center's First LA Galaxy Match

Much like SKC, the Galaxy were pretty awful in those opening games going 0-4-4. This despite the fact that the Galaxy were MLS Cup champions in 2002. The Galaxy also won the Supporter's Shield in 2002 with 51 points, and made it to MLS Cup back when the playoffs featured best of three series'. 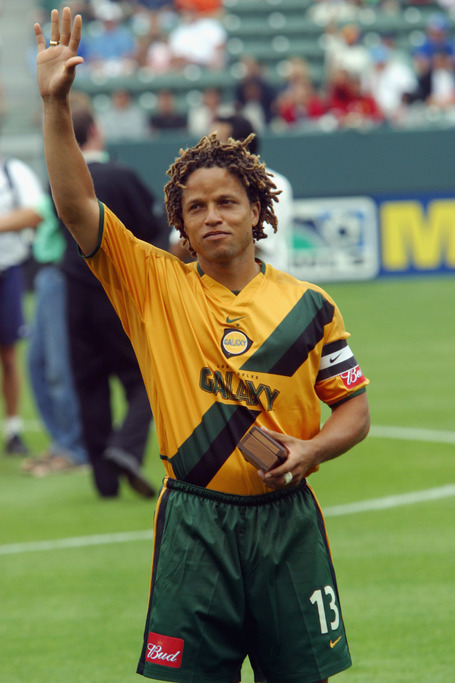 Which meant that when the Home Depot Center opened on Saturday June 7th, there were rings to pass out. There's Galaxy great Kobi Jones wearing the Captain's band with the ring on his raised hand and the box in the other. The Sash and Green and Gold combo were new for 2003. It went away for awhile...but now it's back.

Before the opening game on Saturday, there was a Gala event at the American Express Club honoring Philip Anschutz and Lamar Hunt. The Hunt group had already built Columbus Crew Stadium in Columbus, and would partially finance FC Dallas Stadium (City of Frisco owns it). The Hunts would sell SKC before Livestrong was built, but a condition of sale was the building of a stadium.

The other link between the Houston Dynamo Stadium and the Home Depot Center is that 10 years from the groundbreaking of HDC, Anschutz will have completed his second MLS stadium. The Colorado Rapids, Chicago Fire, and NY/NJ MetroStars all built stadiums after they were sold, and DC United has yet to find a solution.

Which is all to say, if anyone deserved a gala, Anschutz and Hunt were it. Four stadiums between them, and four more after sales. No wonder they both have soccer trophies named after them. Al Michaels hosted the event, then governor Gray Davis was there, Don Garber, and of course Pele. American Soccer's first foreign hero. 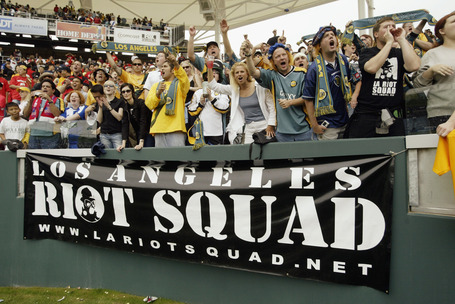 And it's the Riot Squad. Now I've never had an affiliation with either of the two major supporters groups, so not taking a side, but it's kind of cool that the Riot Squad traces their roots back to 2001. They were there for the HDC opening in 2003 (though that website no longer exists) and they were there when the Angel City Brigade debuted in 2008. 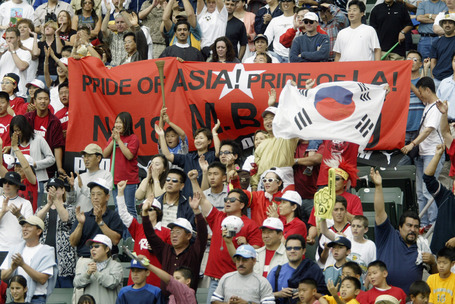 Also present in 2003 was the contingent supporting Korean star Hong Myung-Bo. Bo made 136 appearances with the Korean National Team over 12 years, but was 34 when he joined the Galaxy. He stayed for two years and made 28 appearances scoring no goals then retiring.

You know for all the noise about Frank Lampard, I wonder if the Galaxy have ever kicked the tires on Park Ji-Sung. Just a thought. 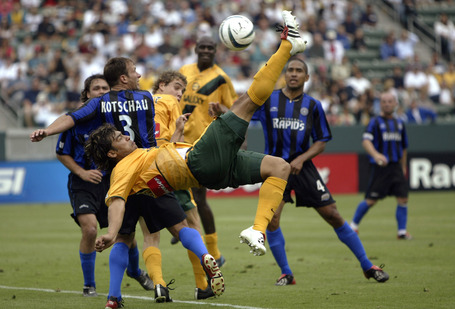 Anyhow, the Galaxy played the San Jose Earthquakes Colorado Rapids that day, winning 2-0 (but look at those Rapids kits and tell me you don't think Earthquakes). El Pescadito scored both goals. There he is mid bicycle kick. Of course, the Guatemalan striker was named MLS MVP in 2002. The team ended up going 3-0-1 in June at the Home Depot Center. They finished fourth, but the HDC hosted both the All Star Game and MLS Cup (which San Jose, lead by Landon Donovan, won).

So good on your SKC for getting a stadium built. Hopefully it'll host the ASG next year. And then Houston the year after that. And it's probably not all that long before one or both host the MLS Cup. The sky is probably the limit.

Oh and the white away kits that year with the sash were worn with white shorts. Much cleaner look, and I assume the look the Galaxy will don this year.