Can LA pass New York into oblivion? A tactical preview

What are the match ups to consider when LA takes the field this weekend, and what do the numbers say about New York? A tactical preview of the Galaxy's big game against the New York Red Bulls.

Share All sharing options for: Can LA pass New York into oblivion? A tactical preview

On Sunday the LA Galaxy will face off against the New York Red Bulls in what could very well be both Landon Donovan and Thierry Henry’s last game against each other. Fresh off a comprehensive dismantling of the Sounders, followed by a disappointing tie in El Salvador which bounced them out of the CCL, New York comes into town hungry for points in order to stay above the red line in the dogfight that is the Eastern Conference playoff race.

LA, on the other hand, is looking for 3 points to continue their supporters shield push. With Seattle’s loss to Dallas on Wednesday, the Galaxy have a chance to put themselves on top of the Western Conference and force Seattle into the unfamiliar position of needing results to keep pace. Needless to say, it’s going to be a big game on Sunday, so here is a taste of what to look for.

Ok guys, it’s time to get Nerdy with it. While data analysis can sometimes seem boring, it’s an invaluable tool when it comes to scouting and understanding the game. So what do the numbers tell us about Sunday’s game? The Galaxy should control the game.

As Devin Pleuler showed in a recent Original Winger article, the Galaxy pass the ball a lot more than most teams. They are patient and probe the defense for holes—rarely forcing it. New York, on the other hand, is rather average in this department. 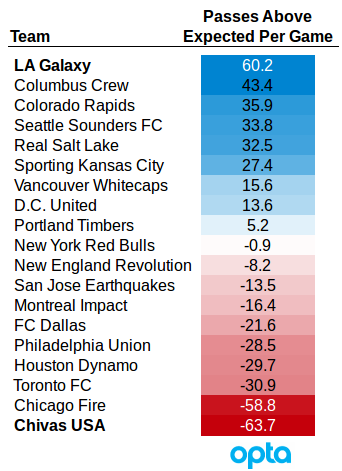 And here is the latest data from American Soccer Analysis.

While New York and LA have comparable possession numbers, LA is far better at turning possession into chances. They out shoot New York by a great deal and allow fewer shots against them. For this reason, their Expected Goals numbers are miles apart— .80 v .06. With this in mind, and considering it’s a home game, the data suggests that LA will create far more chances in Sunday’s game.

Finally, Chris Gluck at Possession with Purpose, has a fantastic system which measures teams against various league averages in a number of metrics, in order to construct an attacking and defensive index. For a complete explanation of his system, look here, but here are the basics of what the system takes into account when measuring a team’s attack.

And here is his attacking index 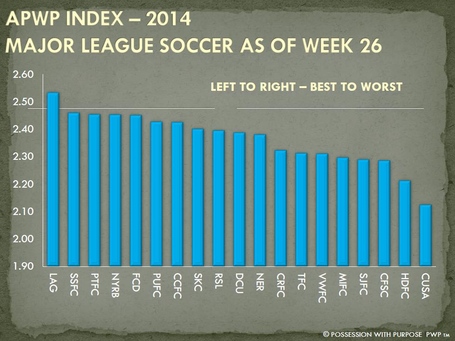 As you can see, LA's attack is dominant, but  New York’s attack is nothing to be trifled with. Things get interesting, however, when you look at the defensive index, which measures a team’s ability to 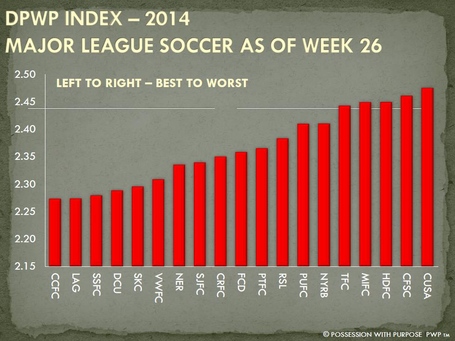 As you can see, New York fails woefully in this department, which suggests the Galaxy should have no trouble in breaking down their defense.

But Soccer isn’t just about numbers. Here are some tactical considerations.

The 4-2-3-1 is very much in vogue in MLS, and it is most likely how New York will line up on Sunday. 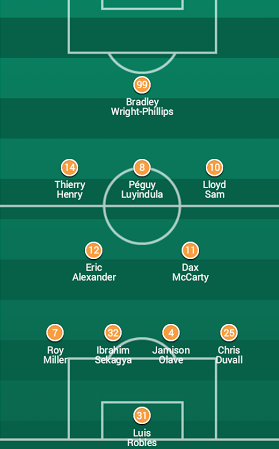 And if you look at whoscored.com’s average positioning charts from their game against DC, you can see that there is very little tactical nuance within the system—in other words, where each player lines up vs. where their average positioning is on the field, is basically the same. 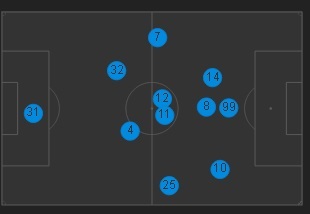 Now, as I have emphasized with all 4-2-3-1’s the Galaxy have faced since their switch to a flat 4 midfield, the marking ability of the opponents outside midfielders will be key. In this case, those players are Henry and Sam. If Sam can’t consistently get back and mark Donovan, then LA will have a numbers advantage when attacking down the left. Donovan, Rogers, Keane (withdrawn) vs. Duvall, and Olave. If McCarty shifts over to even out the numbers, then Sarvas will be unmarked. If Alexander moves to mark Sarvas, then either Ishizaki or Husidic will be unmarked. The Galaxy attack with 7, and in a 4-2-3-1, unless the outside attacking midfielders are willing and able to cover a lot of ground and put in a lot of defensive work, then only 6 players are available to cover. That man advantage means space and goals.

In terms of New York’s attack, it highly unlikely they will create any where near the number of chances that LA will, however, with Henry and Bradley Wright Phillips spearheading your attack, it doesn’t take all that many chances to score. In short, LA needs to be clinical in putting away their chances and limit Henry’s influence on the game as much as possible. Easier said than done, but this is a game that LA should fully expect 3 points out of.