With his best defensive performance of the year for the LA Galaxy against FC Dallas, Robbie Rogers turned a corner on what kind of left back he could be. He's already shown how good he can be on the attack, so lets compare his best performances to a top performance by career long left back Todd Dunivant.

Share All sharing options for: Robbie Rogers' defense starting to pay dividends for the LA Galaxy

With his best defensive performance of the year for the LA Galaxy against FC Dallas, Robbie Rogers turned a corner on what kind of left back he could be. He's already shown how good he can be on the attack, so lets compare his best performances to a top performance by career long left back Todd Dunivant.

First let's look at the incumbent Rogers replaced. WhoScored only keeps records from the current season, so we'll look at Dunivant's best performance in 2014 when he went ninety against DC United in a 4-1 victory. His performance earned him a 7.0 match rating, with 67 touches and a 81% pass accuracy. When you look at those successful passes on the Opta Chalkboard, you can imagine what his heat map must look like. 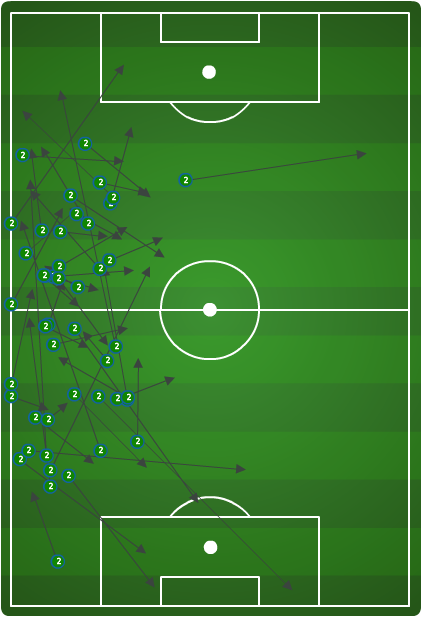 If you look at Dunivant's defensive contributions for that game, he was able double his average tackles: from one per game to a whole two. His average interceptions and clearances hover about that one mark, and against DC he was able to triple and double those averages. So if Dunivant is a baseline, then box to box play is a marker of a good fullback performance, with any statistical register in defensive or distribution metrics a bonus.

Compare that performance to Robbie Rogers and you'll get something favorable right away, as Rogers' average as a left back this season is 7.42 over eleven apperances; almost half a point better on average than Dunivant's best performance this season. His passing has been good enough to earn a very strong characteristic. His best rated performance was a 8.2 man of the match performance in a 1-1 draw against Chivas USA. 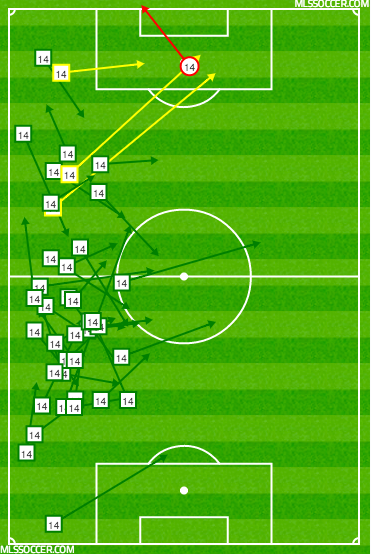 Like when we analyzed Dunivant's performance you get a sense of Rogers' box to box play, but the attacking involvement in this June match is much greater. Those yellow lines are three key passes, there's a shot in the box that led to a shot attempt for someone else marked by a red line, and one more pass showing final third involvement. Defensively Rogers kicked in with 13 tackles, interceptions, recoveries, and clearances along the left side of the pitch as well as two more inside the penalty area.

Rogers's defensive performance against FC Dallas over the weekend was called his best of the season, so lets look at his defensive moments in that one: 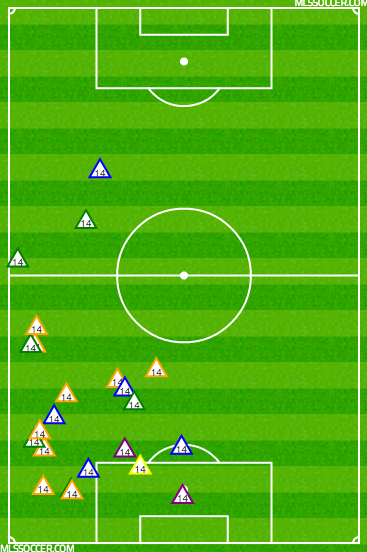 Attacking involvement got Rogers his best match rating of the season, but look how active Rogers was defending the entire left half of the field. That makes life a whole bunch easier for the center back paired next to him. Feeling that security behind him, Landon Donovan was freer to push up forward and not worry about the counter-attack. A lack of key passes meant his match rating wasn't as high, but it's not a coincidence Keane was able to find the space to send in that match winning cross on Rogers' side.

"He was excellent," said Landon Donovan, "he made my job really easy and I can't remember a game when I had that many opportunities to run forward because he did such a good job behind me. He picked up a lot of passes, he defended well, he got the ball to me in really good spots and I think that it made a difference. As the game wore on, I think we just wore them down on that side and he was terrific."

If Rogers can continue to make life easy for Landon Donovan with his defensive play, he's benefitting the attack even when he isn't creating goalscoring opportunities. When he does overlap and get in crosses for the likes of Alan Gordon and Gyasi Zardes, that will be all the better for the attack.