Alan Gordon and Stefan Ishizaki were the right subs to counter Dallas' well executed game plan. Here's a tactical breakdown of the LA Galaxy's stunning come from behind victory against FC Dallas.

On Saturday night, the Galaxy were able to stage a dramatic come from behind victory against FC Dallas, simultaneously clinching a playoff spot and pulling even with Seattle in the race for the Supporter’s Shield. Despite injuries to Fabian Castillo and Mauro Diaz, arguably Dallas’ two best players, Dallas came in with a smart game plan and battled the Galaxy every step of the way.

From the get go, Dallas seemed dead set on limiting Landon Donovan’s opportunities in the final third. Of course, this is an obvious focus of many teams who match up against the Galaxy, considering Landon accounts for roughly ¼ of the Galaxy’s total chance creation this year, averaging 3.42 chances created per 90 when playing as an inverted winger. 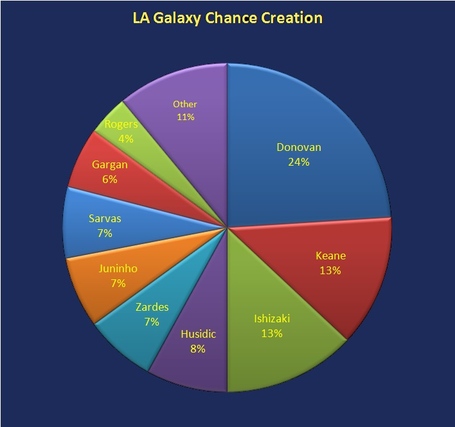 Many teams have tried and failed to limit Landon’s influence on the game; however, on Saturday, Dallas was able to hold Donovan to only a single chance created from open play. A lot of this had to do with the way they lined up. Here is a the formational chart from whoscored.com 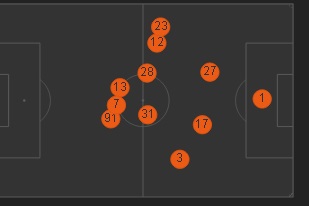 A lot of people were surprised to see Hollingshead (number 12) line up on the outside, however, I think this was a tactical choice as it added an extra man providing deep lying cover on the Donovan/Rogers side. Take a look at his heat map. 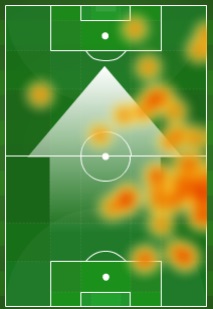 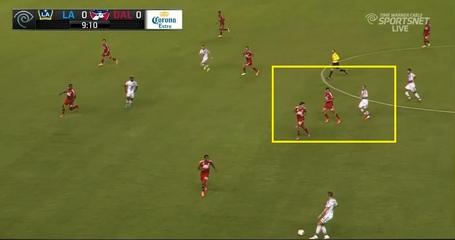 This was not a bunker strategy, however, as Dallas’ right back, Kellyn Acosta, was extremely adventurous in the attack as his heat map shows. 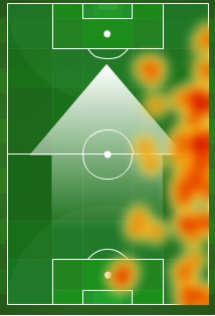 Acosta’s positioning was a bit of a gamble, as it left a lot of space behind him that the Galaxy could exploit on the counter; however, I believe that Dallas’ willingness to take that risk is rather telling of the transformation this Galaxy squad has undergone from last year.

It wasn’t too long ago that the striker pairing of Robbie Keane and Landon Donovan made LA one of the most dangerous counterattacking teams in MLS. In fact, it was the focus of our offense for many years. This year, however, the Galaxy has undergone a bit of a metamorphosis, transforming from a team focused on the counter, to a team focused on generating chances through possession.

While the Galaxy has benefitted tremendously from this renaissance, it’s hard to argue that their counter attacking prowess hasn’t lost a great deal of its venom. For me, the primary reason lies in Donovan’s move to midfield and Zardes’ move to forward. Gyasi, while putting up excellent numbers this year, is still extremely raw when it comes to making smart runs in transition. Landon, on the other hand, is an utter master at this.

Despite the why of it all, it’s something that teams across the league are noticing and taking into account when planning ways to stop the Galaxy’s high powered offense.

In the case of Dallas, the Hollingshead/Acosta gambit worked beautifully. Acosta was able to provide width in the attack, and, with the Galaxy unable to punish his bold attacking runs by catching him out of position on the counter, Acosta was able to perform his defensive duties rather well, with the added benefit of Hollingshead in front of him making it difficult for Landon to make those dangerous angled runs from the left side, which makes him so good as an inverted winger.

With Landon struggling to create chances and FC Dallas already up a goal, Bruce subbed out Baggio Husidic for Stefan Ishizaki. "Husidic is a little bit more of a two way player," Bruce explained after the game. "Ishizaki is certainly a more creative player— probably, you could argue, a better player in the final third."

On Twitter I was skeptical of the move because, despite Ishizaki’s creative reputation, his chance creation numbers aren’t all that much higher than Husidic’s when stripped of set piece inflation. However, on the night, Ishizaki delivered.

Stefan Ishizaki created 4 chances from open play in his 33 minutes of action, and the team’s rate of open play chance creation increased by 32%.

Here is the chance creation map from after the subs. 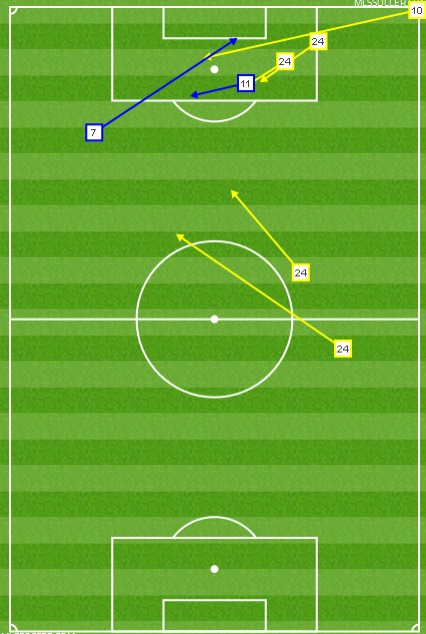 Although Ishizaki did directly have an assist, his threat on the wing undoubtedly spurred the Galaxy attack.

So what, if anything, can the Galaxy learn from this game? For one, LA continues to struggle with teams with dynamic attacking fullbacks-- something we saw earlier in the year when Portland’s Jorge Villafaña ran roughshod over the Galaxy defense. On a more positive note, we saw that, even when Landon Donovan is marked out of a game, the Galaxy are able to create plenty of chances. With better finishing, the Galaxy could have easily gone into the half up by two.

The continued success of Alan Gordon in the super sub role is extremely encouraging, as he adds a physical element to the attack which the Galaxy lacks when he is not on the field. By far the most intriguing aspect of the game was the performance of Stefan Ishizaki. His play reminded Galaxy fans of his stellar early season form which had everyone abuzz with excitement over the Swede. Consistency has been a major problem for Ishizaki, however. If he can figure out how to more routinely put in attacking performances like this, it won’t be long before the Galaxy are lifting some silverware.