Anatomy of a Goalkeeper: Zac MacMath

How better goalkeeping could have prevented the Union from losing early

Share All sharing options for: Anatomy of a Goalkeeper: Zac MacMath

Anatomy of a Goalkeeper is a periodic series focusing on the goalkeeper position. Credit to Zak Abdel for technique.
___

This week, I wanted to take a look at the LA Galaxy's first goal in their 4-1 rout of the Philadelphia Union, on an historical day for #LD135.

Now, don't get me wrong. I'm a Zac MacMath fan. His streak of three PK saves in a row speaks for itself. He's stepped up his game this year, and though it seems like he's been around forever, he's still just 22 years old.

But unlike the Galaxy's Jaime Penedo, who's biggest weakness is arguably technique, MacMath can be prone to moments of indecision.

The sequence begins with Landon Donovan driving in a cross 40 yards from goal.

Two decisions end up dooming MacMath on this play.

When Landon crosses the ball, MacMath is too close to the near post for my liking. 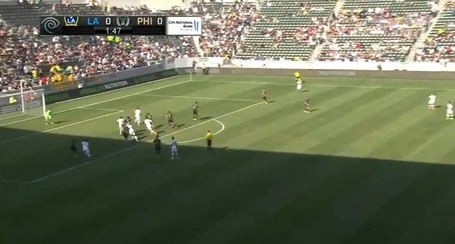 Based on where the free kick is located, MacMath should be expecting Landon to play the ball far post. There's no pressing need to cover the near post angle, not when the ball is too far away to present any real danger.

Ideally, you want to position yourself near the far post during this kind of set piece, because it's easier to make a play running towards the ball than having to scamper in the opposite direction, as MacMath is about to find out.

As the ball dangerously careens towards the far post, MacMath's habit of indecision pops up at the wrong time. The Union goalkeeper takes a step with his left foot, then after losing track of the ball's flight, backpedals from the 6 yard box to the goal line.

Which, to put it lightly, isn't a good idea. As a goalkeeper, you never want to be moving backwards with the ball heading in your direction. It's kind of a golden rule. You're covering less ground, and your backwards momentum makes it harder to move around.

To put this logic in a different perspective, it's the same reason why goalkeepers are always hopping off the line during PKs. When you move backward, you ultimately give your opponent more of an angle to shoot from while making it more difficult to make the save yourself.

It's just not good technique, and should be avoided whenever possible.

After watching the above gif a few times, you can start to see what happened. If MacMath is positioned correctly when Landon takes the free kick, all he has to do is take a few steps and win the ball in the air. 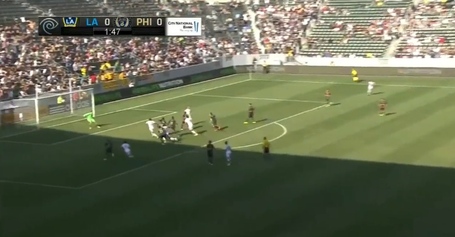 But by moving backwards, MacMath is practically inviting Leonardo into the space he needs to crash into the box and nod the ball down. And when MacMath tries to make a play on the ball, all he can do is slip on the grass in agony. Not only does MacMath take himself out of the play, running from the space the ball ends up, he effectively kills any chance he has at making a save.

Now, some might say the blame for the goal lies with Amobi Okugo for giving Leonardo a free header, and I would agree. But as a goalkeeper, it's important to deal with crosses inside your 6 yard box to keep these types of goals from happening in the first place.

And better goalkeeping could have prevented what turned out to be a backbreaker of an early goal.