Hey fantasy friends! Lineups are due...today? Time to get moving.

The schedule for this round is below. 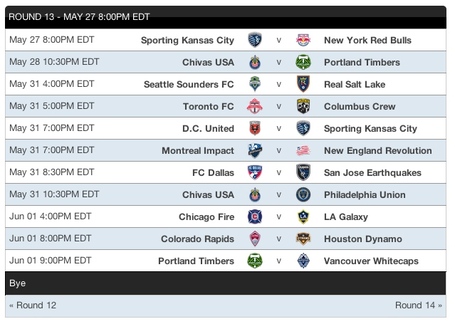 Ok, there's no getting around it. It's slim pickings this week in MLS fantasy league.

Sporting Kansas City, Portland and Chivas USA all play twice this round. Hopefully, you still have at least a few Sporting KC players on your roster.

The problem is, neither Portland or Chivas USA have many attractive options this week.

So far this season, TImbers players haven't provided good value for money. When coupled with Caleb Porter's annoying habit of rotating his lineup, it becomes difficult to recommend anyone.

Diego Valeri ($10.4) has been their most consistent performer, and is easily your best bet. The always dangerous Darlington Nagbe ($9.0) has the potential to break out, but his fantasy stats are bleak, so he's a risk.

Steve Zakuani ($5.8) is a potential sleeper pick, and if you have yet to figure out your goalkeeper situation, Donovan Ricketts ($5.8) isn't a bad option.

Meanwhile, Chivas USA are terrible. Stick to Cubo Torres ($8.7), who always seems to find a way to score. After a hot start, teams have figured out how to stop Mauro Rosales ($7.5) and his production has fallen ever since, so he's probably not worth the gamble.

If you're looking for plan for Round 14, Drew Moor ($7.6) is a smart pick up. The Rapids have double duty next round, and against an aimless Houston attack that doesn't know how to score without Brad Davis, the odds of a shutout this week are promising.

And finally, after bringing in Javier Morales ($11.2) during the unlimited transfer window, I may consider dropping the playmaker this week. Real Salt Lake is not the same team without Kyle Beckerman. (And now Joao Plata) Morales is also one yellow card away from suspension, so be careful.

Pick of the week: Diego Valeri ($10.4) With all the iffy choices this week, go with Valeri.

Strategery pick of the week: Cubo Torres ($8.7) Should be good for at least a goal this week.