LA Galaxy about at MLS average at shot selection

Share All sharing options for: LA Galaxy about at MLS average at shot selection

It's been written before, but today the Central Winger wrote an article positing that not all shots are created equal. It should go without saying that shots from outside the penalty area have a lower chance of going in that ones from inside the penalty area, but a simple look at the scoresheet often leads to incorrect assumptions about an offense overwhelming an opposing defense with shots.

Since the start of the 2012 MLS season, shots taken within ten yards of the net have resulted in a shot one out of every five times. Beyond that mark the chances lower to one out of every fifteen. The article goes on to conclude that the Galaxy take about 16.5% good shots per match, putting them in the top half of the league, when also factoring in things like the low percentage of headed shots that go in. 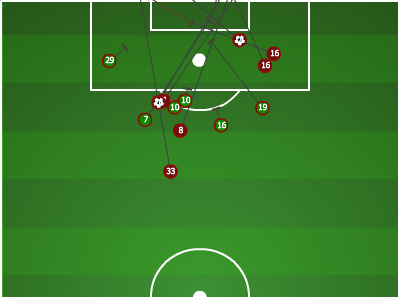 Checking out the Galaxy's shot chart from last time out there's a good balance of both the high percentage of low percentage shots. LA was able to get a goal from both situations, with Keane's early goal coming of the high likelihood variety and Michael Stephen's toe poker of the low likelihood. Catching Bill Hamid napping was key in getting that ball to go into the back of the net.

As the good shot rule as defined by Central Winger is ten yards out and not simply inside the penalty area, there are really just two shots from the DC match that qualify as good; the Keane goal and a Hector Jimenez shot from a similar area that went wide left.

LA didn't get many set piece opportunities against DC, winning nine fouls but only one close enough for an attempt on goal. The Galaxy earned two corners, but neither resulted in an attempt. Whereas LA have been successful recently in keeping the match in the opponents half, the majority of the action against DC happened at midfield and there was more possession in the Galaxy's defensive third than in the offensive third.

While some were surprised Omar Gonzalez called out the midfield when he made a major error, there is something to the argument. All season Galaxy midfielders have been able to keep the ball in the offensive third, winning balls at midfield, but it simply wasn't happening against DC.

Perhaps we'll see more lineup rotation that expected tonight, with Arena needing fresh legs for the match on Saturday against Seattle. LA need to get back to the way they've played during their winning stretches.