On UniMas and the continually growing Hispanic soccer market

Soccer continues to grow as generations of Mexican-Americans come of age. Channels like UniMas cater to this market, and it all works together to grow the game.

Share All sharing options for: On UniMas and the continually growing Hispanic soccer market

I'm always a bit timid to write about Mexican-American issues because while there are issues relevant to the American soccer world, they are issues I view as an outsider. It's not my world, I don't speak the language, but there are trends that I notice especially when it comes to TV ratings. So this is an attempt to explain what I see in the data.

UniMas to date has shown that it is clearly not Galavision. The ratings are setting records left and right, and Larry Tiscornia is telling folk on twitter that UniMas broadcasts are the highest rated for MLS this season. This hot streak continued last night as John Ourand reports UniMas pulled 7.8 million viewers.

Further definition is given when the numbers are broken down by media market. It was the top broadcast of the day in both Los Angeles and Houston. Given that last night featured new episodes of The Voice, NCIS, and Dancing With the Stars, that's fairly significant. In the all important 18-49 market (as well as 18-34) it was the top broadcast in Los Angeles, Houston, San Francisco, and Sacramento.

According to the 2010 census data, the city of Los Angeles is 48.5% Hispanic. That percentage holds up throughout the county, with 47.7% Hispanic. 35.8% of the county is considered Mexican. Houston was reported as 44% Hispanic. Sacramento comes in at only 26.9% Hispanic, with the San Francisco Bay Area similarly 23.5% Hispanic. 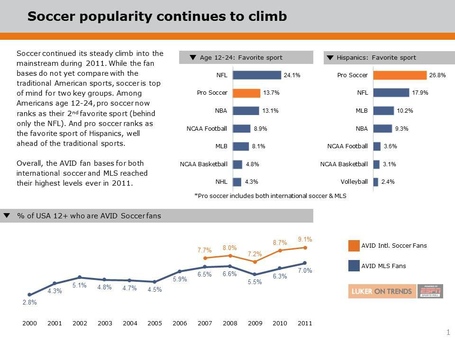 Last year ESPN released a poll using 2011 data showing pro soccer as the second favorite sport among those aged 12-24, and the favorite sport amongst Hispanics. It also shows the continued growth of Americans 12+ who consider themselves AVID international soccer fans and MLS fans. These recent UniMas ratings certainly support this data.

At the same time, there's a generation of Mexican-Americans playing both in MLS and in Mexico that are starting for the US national team. Omar Gonzalez, Herculez Gomez, and Joe Corona were all born in the States to Mexican parents, and now play for the US. The Mexican national football team can't claim that same cross border representation.

FutbolMLS writes (in Spanish) about how difficult it can be for Mexican-Americans to figure their alliance. I'm not here to argue for either side of the coin, just remarking at what is one of the key stories within American soccer right now. It's an issue that Omar Gonzalez has dealt with personally.

As every year more and more Mexican-Americans come of age, the sports landscape will continue to change. That's good for soccer, and that's all I really care about.