The LA Galaxy were lured into a much slower paced match with fewer possessions and more breaks for fouls and injuries. Chivas kept things close this way, and eventually got the late equalizer.

Was the LA Galaxy passing poor against Chivas USA? Bruce Arena certainly thought so. While reporters initially suggested fitness might have had something to do with the draw against the Goats, Arena was unwilling to get much more descriptive that his team didn't play well. The only bit that did come out in the press conference was that he thought the Galaxy passing was poor.

Using the Tempo Free Soccer method, the LA Galaxy had 16 more possessions than Chivas USA: 122 to 106. In turnovers it's 106 to 104, but with LA having so many more shot attempts than Chivas the possessions got fairly out of proportion.

That means the galaxy have 16 possession that would be deemed double possessions, losing the ball but Chivas was unable to control the ball afterward or taking a shot and getting the rebound. Jack McBean's goal was the result of a double possession. Magee's header off the post fell to Marcelo Sarvas.

First off, in a match where the Galaxy were forced into an aerial attack, the Galaxy were 6/16 on crosses; only two of those led to shot attempts. Passes in the box were about 50/50.

Mining the data: What can Tempo Free Soccer teach us about the LA Galaxy? 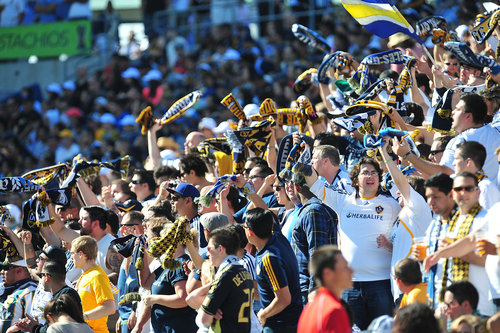 Tempo Free Soccer publishes a league table with expected goals and expected points per match. What can we learn from the data they're producing.

If there's one key difference in the way things proceeded against Chivas than against Chicago is that against Chivas three of the four key passes in the box came from defenders. Robbie Keane, who's usually quite involved in distribution, is completely absent from the key pass column.

What of Colin Clark? Bruce Arena thought him ineffective enough to remove him at halftime, perhaps hey could be the key to the Galaxy's passing woes. Clark's Opta heat map is spotty, and he didn't register than many events. His passing was 50/50, and his biggest contribution was drawing two fouls (and that red card).

Another player with few match events despite starting is Jose Villarreal. The difference between Villarreal and Clark was that while Villarreal didn't register often when he did it was almost always beneficial. In ten possessions he only turned the ball over three times. He had a shot on target, one off the woodwork, and one well wide.

Keane was pretty awful in his final third passing, with just one out of eight actually connecting with his target.

The data suggests that Chivas significantly changed the Galaxy's tempo from the last three matches. The obvious explanation for that change in tempo would be the large amount of fouls committed by Chivas, both those called and not called. The physical match also means more injuries, and Chivas did a fair amount of time wasting. Keane gestured to Salazar to get the pace back up more than once during the match.

With the tempo slowed the Galaxy went to the aerial attack with attempts in the box at four headers and three with the foot. The other half of the Galaxy attempts came from outside the box. LA was unable to push past the way Chivas wanted to play and dictate the run of play.

Arena said in the press conference that he wasn't surprised that the Galaxy's lone goal was a bit ugly. Keane said the players played with heavy legs, and things aren't going to be any easier next week with Keane called up to the Irish national team and Omar Gonzalez going to the US national team possibly being announced in the next few hours.

Colorado have their own issues, losing Matt Pickens to a broken arm and having Edson Buddle on the roster. We'll get into that over the next week, for now we'll have call-ups in a few hours and there's more to churn out from this SuperClasico.