The people at adidas have designed a new World Cup ball, the brazuca, and if the company stays true to recent history that means MLS will get a modified version of the ball as their match ball next season.

The people at adidas have designed a new World Cup ball, the brazuca, and if the company stays true to recent history that means MLS will get a modified version of the ball as their match ball next season. MLS used a modified Jabulani for the 2010 and 2011 seasons, then adopted a version of the 2012 European Championship ball over the last two seasons.

Most of the concern over the new ball is directly related to the last World Cup ball. There was much ado about adidas designing a ball for the 2010 World Cup which was light with very few seems causing the ball to knuckle around in the air. 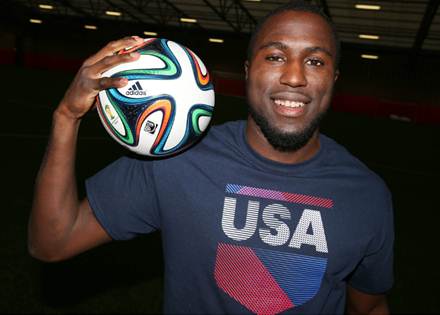 The solution adidas came up with was six boomerang panels which reduce the number of seems needed while making the seems that do exist longer. 600 players were involved in the testing, which they claim is their most tested ball. At two and a half years in development, I'll buy that.

"The FIFA World Cup match ball is the icon of the tournament as the centerpiece of every goal, every play and every touch," said Ernesto Bruce, director of soccer, adidas America. "adidas has a rich legacy at the World Cup, providing the official match ball for every tournament since 1970. The brazuca is a breakthrough innovation built for every player on the field."

In the Uni-Watch write up of the ball, Paul Lucas remarked that while indifferent to the sport he found ball construction fascinating. That first adidas World Cup ball, the telstar of the 1970 World Cup in Mexico, continues to be the public concept of what a soccer ball looks like. The six MLS logos which feature soccer balls all use the telstar in its design.

Modern soccer has broken away from other major American sports in accepting repeated changes in the ball on the field. Baseball played through dead ball eras and juiced ball eras, not to mention the current experimentation with humidifiers in Colorado, but the mere fact that slight changes in ball construction is referred to as an era shows how drastically it affected the game.

Players use different balls made by different companies in different competitions on different surfaces, and there's an expectation that they'll just adjust. When the NBA ball was redesigned there was an instant revolt and the old ball returned. Sure there's direct contact with the hand in that sport, but it's as climate controlled as can be.

So while adidas is touting their latest breakthrough in soccer football technology, think about MLS players being expected to play with a new ball every two years. Outside of the marketing, which makes perfect sense, does it make sense from a competitive standpoint? Or are those other sports just afraid of change?