MLS released a new map with possible expansion targets today, which confirms some of the suspected targets as well as introducing some new names. Atlanta, Minneapolis, St. Louis, San Antonio, and Miami all feature as possible targets.

MLS released a new map with possible expansion targets today, which confirms some of the suspected targets as well as introducing some new names. What the map shows is that MLS is listening to the NFL owners who want to include MLS as part of their new stadium plans, and that expansion is focused east of the Rocky Mountains. 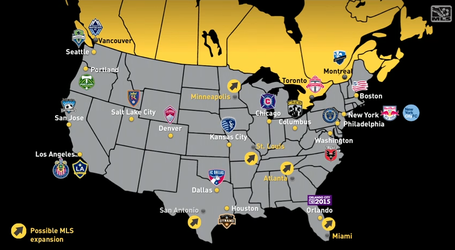 Minneapolis broke ground on their new NFL stadium today, which concept drawings have shown with a soccer configuration. Atlanta as is also in the boat, though they haven't broken ground there are soccer specific concept drawings. Miami another known target with David Beckham lead the charge for a second MLS team in the sunshine state.

St. Louis and San Antonino are a bit more surprising. The Missouri city has shown well recently hosting big crowds for soccer events, which has bent MLS' ear. Neither of them were in stadiums built with soccer in mind. San Antonio has built a soccer specific stadium for their Scorpions, which holds 8,296 for soccer and is expandable to 18,000 (clearly with MLS in mind).

The absence of some of the other startups in Sacramento, Indianapolis, and Detroit shows that the Sons of Ben expansion plan is loosing ground to the Orlando City plan. It takes more than a supporter's group; if you build it MLS will come.

St. Louis is the wildcard here without a known ownership group or grounds to play on. It would not shock me to see MLS go into San Antonio and their completed stadium next after Orlando to even out the numbers, then into the two NFL stadiums when they're completed to meet their 24 by 2020 goal without having to break any ground on their own. That'd allow MLS to focus its efforts on getting NYC FC a stadium without having to worry about Miami too.

As much as everyone assumes MLS wants to worth with Beckham to get his big discount, MLS hasn't said publicly that it's going to do whatever it takes to reach a Miami agreement before the year's end. In fact in today's State of the League address Garber said the Miami group hasn't brought plans to him and doesn't plan to do so during MLS Cup week. Garber mentioned MLS cannot go into Miami without the right stadium proposal.

It's good to know MLS isn't willing to go in half baked to capitalize on Beckham's name. I think Miami would certainly trump San Antonio were they to get a stadium plan together, but the current direction of MLS has facilities as its main focus. Save for NYCFC of course.