After the LA Galaxy's 1-0 win over Real Salt Lake, Bruce Arena was asked if Salt Lake coming out in a 4-2-3-1 formation caused him to make any adjustments. His reply that RSL "came out with eleven guys, just like we expected" while funny has contradicted Jason Kreis who accepted some of the burden for how the changes affected his squad.

Kreis said he accepts burden of putting team in different formation Sunday: "We will put them back in their shape and see how that goes." 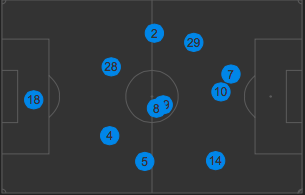 Marcelo Sarvas and Juninho could have been a bit more spaced out, but otherwise this shows effective coverage of the entire pitch. Fullbacks play up in Arena's 4-4-2, pushing the outside midfielders into winger positions. Donovan played behind Keane, but we also saw Keane tracking back often to get involved with the midfield. 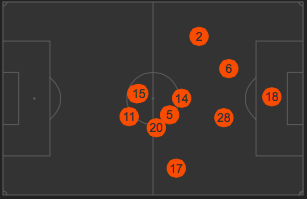 Real Salt Lake on the other hand are scrunched into their own half with Luis Gil playing so close to Alvaro Saborio that he's covered. Ned Grabavoy (who's going to be unavailable on Thursday) is in a three person line with Beckerman, and Alvarez. That's the entire RSL attack playing within a few feet of each other. 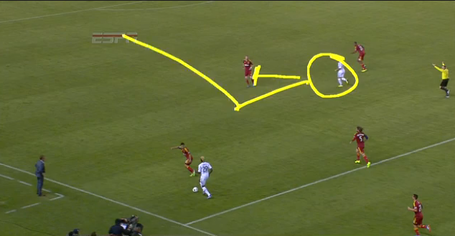 There were a few times when this gave LA players a lot of space to work in, such as this sequence which had Zardes marked by fullback Tony Beltran just after crossing the halfway line. Donovan was able to cut behind Nat Borchers and then use all that space behind Beltran creating his own shot opportunity. He was wide on the shot, but this was a non-breakaway situation where LA was able to catch RSL out of shape. 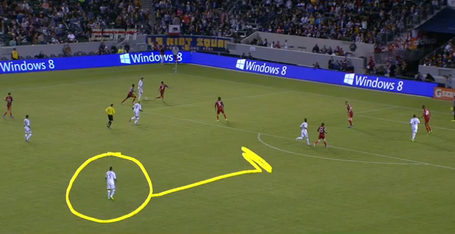 What about Sean Franklin's goal where Salt Lake was so collapsed that Franklin had an acre of space to work in? When Franklin took his shot there were eight RSL players somewhere behind the eighteen-yard mark. Did the formation, which RSL only used three other times this season, cause some assignment confusion?
Maybe Arena didn't concern himself with how RSL were lined up, but it certainly played a role in some LA scoring opportunities and limited Salt Lake's ability to create on offense. Kreis recognised it, and changed things up mid-match after Franklin's goal.