La Barra Clasico, or The Pub Classic, is an annual event wherein LA Galaxy staff and supporters take on Chivas USA staff and supporters. Last night I embedded myself with the Angel City Brigade, to see what the event was like from the inside. I learned a lot about pub soccer culture, the attachment supporters feel to their team, and the staff who do all they can to foster that love.

The ACB won a hard-fought match 1-0, their first ever win over the Union Ultras. The goal came on a play that the Union Ultras gave up on, but Glenn Vidrio didn't. The ACB then spent much of the rest of the match defending what became the game winner.

The Riot Squad also participated in La Barra Clasico, a first for them, defeating the Black Army 4-0. The staff game went in Chivas USA's favor 2-1, though there were some claims of ringers. The supporters groups required their players to have season ticket plans, keeping the playing fields a bit more level.

I thoroughly enjoyed my experience inside the ACB. Having never beaten the Union Ultras there was a strong desire to get things right. Warmups were taken seriously, and the sideline was intense. Not that the tension of the match kept members from cracking jokes. Mostly what I saw was camaraderie, which surely is the most important part.

The goal at SB Nation is to provide fan perspective with professional quality. It's on the masthead. However, I don't think I understood supporter culture until I was invited into the huddle without question. After the match, celebrating the victory, the ACB lined up and toasted all their friends and family who had come out and supported them. Celebrating with them, the same way the Galaxy do with the ACB after a victory, it all made sense.

This has become a treatise on supporters, but my original purpose for embedding myself was to test the micoach adidas sent me in a real match setting. Unfortunately I didn't get into the match, which pushed the micoach stuff to the end of this article, but I can show you the stats from my warmup. This should give you a sense of the type of stats micoach can gather for individual users. MLS will be employing micoach technology during the upcoming All Star Game and in matches afterward.

Micoach tells me that my max speed last night (during warmups) was 8.6 mph. I ran a total of 1.147 miles, although only .01 of them were high intensity. As I tend to sprint at about 10 mph, micoach credits me with no sprints. All this information gets put into a very neat looking graph 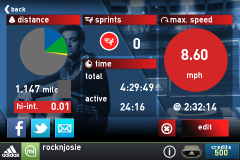 With the new Predator LZ's, the micoach fits underneath the lining of the left boot. During a scheduled workout, it synchs with your phone's GPS, allowing it to collect data in all directions. There are then sport specific apps that you can synch your workouts to, this one being the soccer app. You can see that even though I didn't get in the match, I did get 25 minutes of active time (warmups) which is about the daily recommendation.
So even though I didn't get the payoff of playing in the match, I was glad just to get the exercise. Which is my final recommendation. Be active. Nothing feels better than getting out there and mixing it up. So to complete this PSA: be active, make friends, embrace technology. The LAG Confidential keys to a happy life.