The Galaxy were able to counter after bunkering in the midfield, and it led them to a series saving penalty.

Share All sharing options for: Anatomy of a Penalty: Galaxy counter ends with Keane penalty shot

The LA Galaxy saved their skins earning a penalty five minutes after the hour mark. How the Galaxy got themselves in such a spot requires a look at the opta chalkboard. The replay (embedded below) starts at Edson Buddle's pass to Mike Magee. 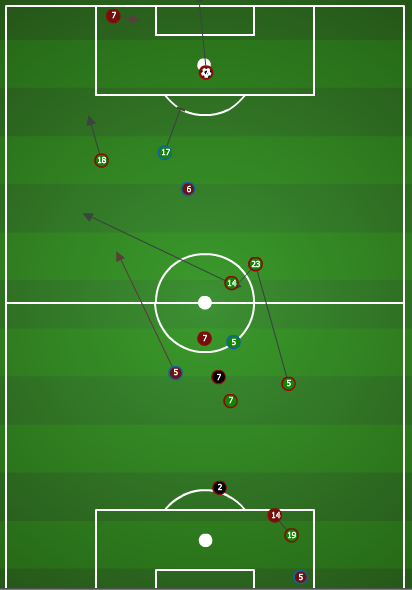 Fredy Montero takes a shot at 65:34 from well outside the box that's blocked by Todd Dunivant. Juninho heads the loose ball to Edson Buddle who clears the ball but only as far as Osvaldo Alonso. Robbie Keane tackles Alonso, they continue to battle for the ball, Adam Johansson gets involved and eventually launches the ball forward from the midfield back into offensive territory.

First thing to note is the timing. Seattle are only one goal down on aggregate at this point, so they're still pressing hard against the Galaxy defense. A shot from that far out is probably ill advised, but Fredy Montero has been having an off month with the playoffs so it's not too surprising.

Edson Buddle and Robbie Keane are both deep on defensive duty. The Galaxy's biggest concern is not giving up that third goal. Still, their counters are becoming the stuff of legend so while offense might not be a priority at this point, it's still on everyone's mind to flip the switch if they have the chance.

Sean Franklin receives Johansson's send up and heads it forward to David Beckham. Beckham lays it off for Edson Buddle who sends it up to Mike Magee. Everyone had been back on defense, so this play is developing out of a jumble in the midfield. Robbie Keane is making a run to Mike Magee's left and Johansson has run back to try and cut him off after seeing the Galaxy push his pass back over a period of seven seconds.

At this point, Seattle have two men back between Keane and the goal, then three men behind them. As concerned as the Galaxy are about letting in that series equalizer, Seattle doesn't want to give up the fourth goal this late in the process. Buddle is making progress into the box behind them.

Keane continues to work Johansson toward the end line, Buddle has engaged the last defender on the back like heading for the near post; which is also where Michael Gspurning has planted himself. Marcelo Sarvas has made his way into the box unmarked.

Johansson is trying to pull his left arm in, and that's where the ball hits first drastically changing it's direction. It also appears to glance off his well extended right hand on it's way out to touch. The fact is Johansson used his left arm to take away a passing lane for Keane and though he tried to pull it back in he caught the ball in the process.

"The hand was in an unnatural playing position," said referee Mark Geiger after the match, "and he was making himself bigger by taking space. His arms were outside of his body."

He intentionally used his hands to take away passing lanes from Robbie Keane who had a wide open target in the box. Penalty, plain and simple. Furthermore, it was a Galaxy counter from a bunkered in position that got the ball where it needed to be. LA certainly bent yesterday, but it was business as usual that kept them from breaking.