Robbie Keane penalty was the lone bright spot in an otherwise dreary match for the LA Galaxy. They played it safe on the turf in the rain, and it got nervy at times.

The LA Galaxy didn't play well last night. That shouldn't be any great surprise, the Seattle Sounders had to press for ninety minutes trying to equalize from three goals down. LA mostly played somewhat bunkered in, and instead of the fast counters they asked Edson Buddle to be a target forward and hold the ball. 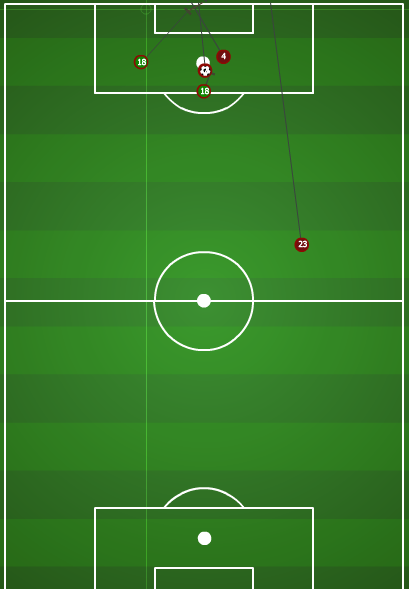 That's the Galaxy shot chart from last night. There's a David Beckham miss on a shot from Portland, and there's Omar Gonzalez getting on the end of a corner kick and heading the ball over the bar. Mike Magee had a shot blocked from the top of the box. Outside of that, there was a Mike Magee attempt right at the keeper and Robbie Keane's penalty kick.

That penalty kick was Robbie Keane's only shot of the night. It's baffling to think that between two paid professional forwards in Keane and Buddle, the only shot attempt was Keane's penalty. One almost has to assume there was a "no shot" order sent down from on high, to explain the frozen trigger fingers. Keane's goal was good for an impressive Match Impact Rating of 84.25. If this were the Castrol Index, the penalty would count less than a normal goal. Still, that penalty allowed a lot of Galaxy fans to finally take a breath.

Buddle may have looked useless, but he did get fouled twice for an MIR of 20.6. That shouldn't be that impressive, especially when Omar Gonzalez and Todd Dunivant both finished with MIRs of 20.

Nothing two inspiring from the midfield: Magee had a shot on goal but had a miss, conceded a foul, and was called for offside twice for an MIR of 0. Sarvas pushed the envelope enough to finish with an MIR of 9 (won a foul but conceded four and had an offside). Chippen apparently deserved to be the first subbed off as he finished with an MIR of -.4. David Beckham finished at 0.