Seattle went central then wide looking to find an equalizer, and it left them open to LA's fast break abilities. It took twelve seconds for the Galaxy to put Seattle in a bad way.

Share All sharing options for: Anatomy of a Goal: Magee finishes Galaxy counter for second goal

Continuing analysis from last night's match between the LA Galaxy and Seattle Sounders FC, we shall use the Opta chalkboards to diagram the Galaxy's second goal. After the first leg of the Seattle - Real Salt Lake series, MLS Analyst Matthew Doyle wrote the following:

But they started to find some purchase in the second half by playing the ball centrally, drawing the defense, then spraying passes to the flanks. It’s a risky ploy because a bad turnover in that spot could end up in a breakout headed in the other direction, but when you’ve gone four games without scoring against the same opponent, some risks are worth it.

Neither Seattle no LA looked that good in the first half, but the Galaxy were able to string some passes together and ultimately get that opening goal just before half time. Now trailing by a goal, Seattle had to open up in an attempt to get an equalizer. Not surprisingly, they played the ball centrally. 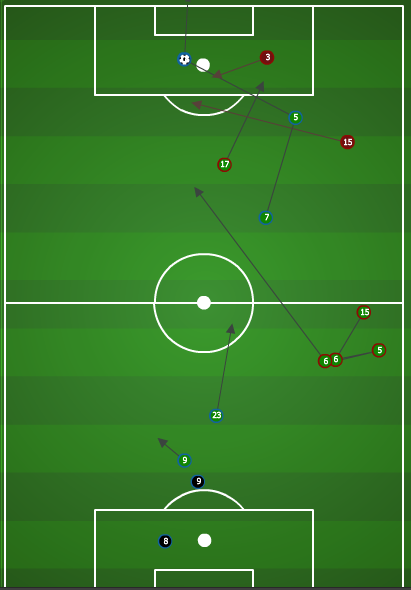 Here are all the events of the sixty-fourth minute in which the Galaxy got their second goal. That acute angle over by the touchline is a game of pass back between Mario Martinez, Osvaldo Olanso, and Adam Johansson. Then Olanso decides to chip the ball to Fredy Montero in the center. Seattle then went wide to Brad Evans, whose pass was intercepted by Marcelo Sarvas. Mario Martinez then chipped the ball back in from the wing, but Christian Wilhelmsson recovered the ball.

So if Seattle was successful in drawing the defense in by playing the ball to Fredy Montero in the middle, any wing play was thwarted by Galaxy midfielders getting back and helping out. As Matt Doyle feared, a turnover at the top of the penalty area led to a Galaxy fast break.

"They definitely had to try and push the game a little bit," said Mike Magee, "which favored us because we love to play counter attacking soccer and hats off to our back four and our goalie were phonomeonal tonight."

Wilhelmsson got the ball out to David Beckham, who played the ball up to Robbie Keane. Sean Franklin was free to make a run all the way up the opposite flank to the Seattle play, where Keane found him with a through ball. Franklin then sent the ball into Magee in the box for the goal. The whole sequence took twelve seconds. Here's what it looks like in real time, starting with Beckham's pass: