A tactical preview of Saturday night's big game between the LA Galaxy and FC Dallas. How to neutralize Mauro Diaz and get Landon Donovan involved.

Share All sharing options for: LA Galaxy vs. FC Dallas: A Tactical Preview

On Saturday night, the LA Galaxy and FC Dallas will square off for the first of two games in this final season stretch in a pair of crucial games that may go a long way in determining the final western conference standings. After FC Dallas’ typical early season burst of points, and typical midseason collapse, they have atypically managed to rise from the flames and put together a late season push.

With their mvp caliber play maker, Mauro Diaz, nearly back to full health, this is a team that should not be taken lightly. On the other side of the coin, it wasn’t too long ago, that the Supporter’s Shield was all but in the Galaxy’s hands. 2 points behind Seattle with 6 possible points on them too close the season—it was ours.

But then the draws came. Bruce’s ill conceived back 3 predictably failed in Montreal, and the lack of chance creation doomed LA against SJ, not to mention Robbie Keane’s unfortunate penalty kick miss. With Seattle now in a more comfortable lead and poised to sprint even further ahead if the Galaxy slip up, this weekend’s clash with FC Dallas is as important as ever. Here is a tactical look at what to expect on Saturday night.

Saturday’s matchup will offer an interesting clash of styles. LA thrives on out possessing and out shooting opponents. Dallas, on the other hand, is a quick strike, counterattacking side. In fact, they managed to beat San Jose 5-0 with only 43% of the possession. Considering that possession is judged by passing and not time, that’s not only fast, that’s direct. That’s a "get to goal in as few passes as possible" type of mentality.

This contrast in styles quietly clearly shows up in the stats.

The Galaxy average 16.4 shots per 90, create 13 chances per 90 and only give up 10.3 shots per 90. In short, they control the ball, keep it away from the opponent and generate a lot of scoring chances as a result of this control.

Dallas, on the other hand, average 11.7 shots per 90, create 8.18 chances per 90, and give up 16.4 shots per 90. They are a team that likes to absorb pressure in order to create space for themselves on the counter.

And if you break chance creation down by player, Dallas is a real interesting team. Essentially, it’s chance creation by committee, with no one putting up outstanding numbers. Despite the hype around Fabian Castillo, he only averages 0.76 chances created per 90. A lot of this has to be with his style of play. Much like Gyasi Zardes last year, Castillo has a tendency to call his own number and take a shot, rather than passing it off to a team mate to maintain possession or set up a goal. Michel averages 1.59 chances created per 90.

Aside from set pieces, he is also exceptionally good at switching the point of attack and hitting players on the run with his pin point distance passes. Dallas’ crafty left back, Jair Benitez, creates 1.36 chances per 90 and is one of the better attacking full backs in the league. Blas Perez creates an average of 1.11 chances per game and is good at layoffs. Finally, there is Tesho Akindele, a sort of hybrid forward/attacking mid, who averages 1.61 chances created per 90.

In terms of chance creation, Dallas’ main threat is Mauro Diaz, averaging 2.19 per 90, however, as he is still recovering from an injury, having only played 35 minutes in their last game, he will most likely start the game on the bench.

When Mauro Diaz is not on the field, Dallas very rarely creates chances around the box.

Here is their chance creation map vs RSL 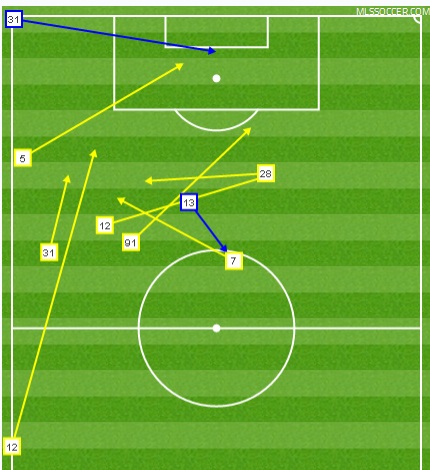 and here is their chance creation map vs San Jose 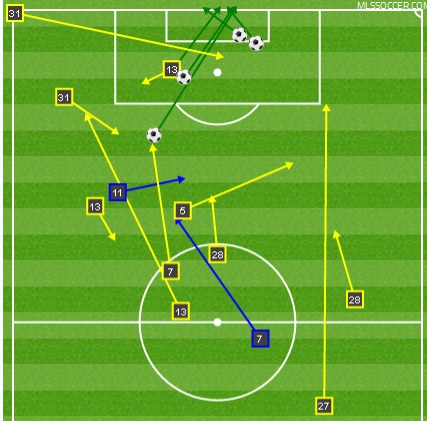 Instead, they often rely on pin point long balls from Michel, who is probably one of the most accurate long ball specialists in league history. Michel often quickly springs the likes of Akindele and Castillo on the counter or plays the ball to Blas Peres who has an excellent hold up game, allowing players to make runs off of him.

Unfortunately, this has been an Achilles heel of the Galaxy all year, especially when Bruce plays Stefan Ishizaki at rm, who likes to push forward into advanced positions, but lacks the speed to recover well. For an example to the Galaxy’s struggles against this type of attack, you need only look at their dreadful performance in Columbus, their dreadful first half against Colorado, and the previous home match up against San Jose.

If I’m Bruce Arena, this is a game that Baggio Husidic, Marcelo Sarvas, and Juninho HAVE to start. Baggio is a work horse and a ball winner and rarely gets caught out of position. Juninho has a poor track record when left on an island as a defensive mid, so it’s imperative that LA has 3 ball winners in the midfield so that at any given time, there should be at least two back to deal with any counter attack.

Aside from counters, Dallas is also exceptionally good on set pieces. Michel is probably one of the best set piece takers this league has ever seen, and Dallas is also an extremely tall team. Not counting penalties, Dallas has 18 set piece goals, 8 of which came off of corners, and 5 of which came off of crossed free kicks. The Galaxy need to limit set piece opportunities, especially if Leonardo starts, given his tendency to totally zone out during set pieces.

How the Galaxy should attack

Dallas will line up in a 4-2-3-1, a formation that LA has had great success against in the past. Here’s why. 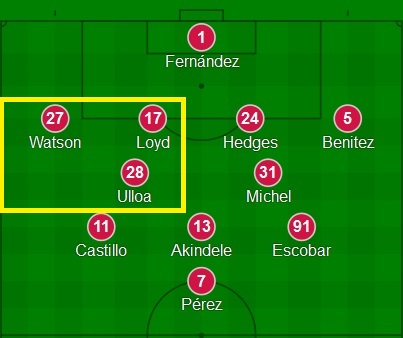 When a 4-2-3-1 lines up against a flat 4-4-2 which utilizes attacking fullbacks like Robbie Rogers, often the right attacking midfielder, in this case Castillo, will be too far up the pitch to help out defensively. This leaves Robbie Rogers and Landon Donovan against Ulloa, Watson and Loyd in attacking the channels to right and left of Watson. In this scenario, Dallas is still covered, 2v3. But LA has ways of flipping those numbers.

One way is to keep Ulloa occupied. If Zardes or Keane is keeping Hedges occupied, and Baggio or Ishizaki push forward along with Gargan, and the ball is being circulated quickly, Michel has no choice but to provide cover on the right, or risk Benitez being left 1 v 2. If Michel is tied to the right, this means that Ulloa is responsible for any central runs made by Sarvas.

This leaves Watson and Loyd 2v2 against Rogers and Donovan, and with Robbie Keane liking to drop back into that space in front of the back 4 and behind those middle two, it can easily tip 3v2 in LA’s favor. If LA is moving the ball quickly, this number advantages can shift very quickly, and it makes it very tough for defenders to read it and adjust accordingly on the fly. Landon Donovan can think faster than any defender in the league, and that’s why he has been so dangerous with Rogers providing him support when attacking those channels.

This is exactly how LA dismantled Seattle in Seattle, and as long as the Galaxy can evenly apply pressure so Dallas’ defensive midfielders can’t cheat to one side, they can do the same on Saturday against Dallas.

Regardless of what happens, it should be a great game and an intriguing clash of styles. Look for my full tactical breakdown after the game.