The LA Galaxy will have Samuel start at forward and Robbie Rogers start at left back against Chivas USA on Sunday . Centerback Omar Gonzalez (USA) and forward Robbie Keane (Ireland) are away on international duty.

The LA Galaxy have announced their Starting XI for Sunday's match against Chivas USA. In the previous meeting this season on April 6, the Galaxy defeated the Goats, 3-0. The Galaxy got goals from Robbie Keane, Stefan Ishizaki and Baggio Husidic. Keane is away on international duty with the Republic of Ireland. The Galaxy will also be without centerback Omar Gonzalez who is on national team duty with the United States.

Samuel will get the start at forward in Keane's place. Gyasi Zardes will also be in the forward slot as opposed to his usual role this season in the midfield. Robbie Rogers will join the back line tonight in his first MLS start of 2014 and A.J. DeLaGarza will be in the center back role to compensate for Omar Gonzalez not being available. 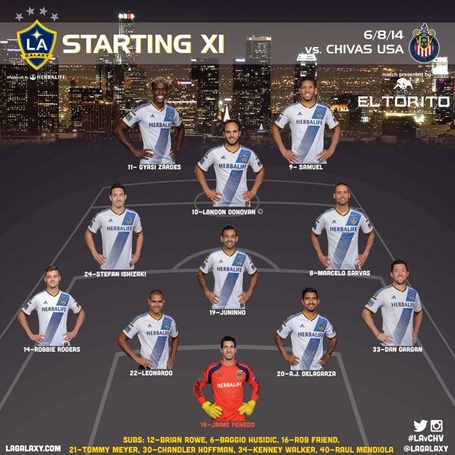 The match kicks off at 5:00 p.m. Pacific at the StubHub Center and is televised on Time Warner Cable Sports and Univision Deportes.

Be sure to drop some comments during the match about this intriguing lineup and what hopes to be another victory for the G's!