Should you use your Wild Card this week?

Anyway, this week's schedule is below. 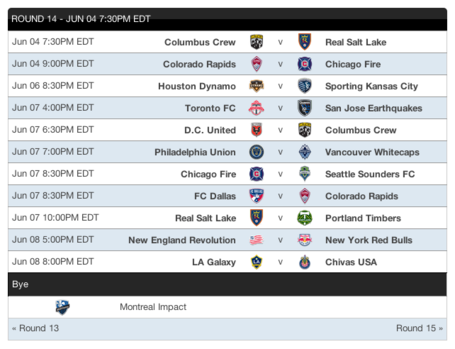 So I was thinking about using my wild card this round. Here's a few reasons why.

-As Andrew Wiebe explains in this week's Starting Lineup, his roster is a mess right now. (Of course, that was in between taking digs at Jason Saghini for admitting to a -12 hit this week)

But with most managers struggling to put out strong lineups and/or taking hits this round, this week is a good opportunity to earn maximum points and leapfrog in the rankings.

-Usually when you activate your wild card, selecting your roster is a compromise between picking the best players in fantasy league and those with short-term benefits, like those with double game weeks. However, with unlimited transfers in Round 15 and 16, you can build a squad that's 100% designed for this round without dealing with the consequences afterwards.

-We're almost halfway through the season already, and from previous experience, wild cards tend to lose value as the season progresses. It's already become more difficult to make money in the transfer market. Just remember that waiting until the end of the season to use your wild card is kind of like saving your best penalty kick taker in a shootout for the 5th attempt.

If you could use some extra funds in the transfer market (and who doesn't?), there's an easy trick to earn transfer money in the next few weeks.

It's pretty simple. When today's games end, head over to the MLS fantasy website and transfer in as many players you plan to add next week as possible. Use the Tranfers In (round) stats filter to find out which players are transferred in the most, and therefore set to increase in price.

Keep the transfer rules in mind, so don't be surprised if you trade away most of your roster and your team value decreases.

Strategery pick of the week: Dillon Powers ($8.0) Powers up top the past 2 games = 26 fantasy league points.