Hey fantasy manager friends! Round 10 is finally here. Are you prepared? You'd better be.

Ok, here's the schedule for this week. 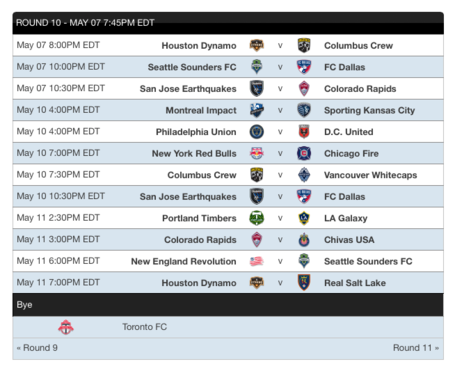 We've gone over the basics before. You need consistent starters who will play 180 minutes, score points, accumulate bonus points, etc. Here are a few more tips to help you refine your squad and move up the standings.

Differentials. If you want to be an elite fantasy league manager, you need elite players, and differentials are no exception. For double game weeks, an elite player doesn't have to necessarily be expensive, or even play for a quality team: All they need to do is score points.

Some managers have transferred in Dillon Serna ($4.8) this round, but he's a differential who doesn't provide a lot of bang for your buck. The Rapids rookie may be a good value, but are you really aspiring to add a defensive midfielder who doesn't earn bonus points? Owned by only 5.5% of managers, Victor Bernandez ($8.6) is a better bet. Say what you will about San Jose, but the Earthquakes have two home games this week, and on that tiny pitch at Buck Shaw, Bernandez scores bonus points and is also a threat on set pieces.

If you want the differential however, you have to go with Brad Davis ($10.8). I get it, it's easy to recommend one of the most expensive midfielders in the game, but with only 3% ownership, the Brad Davis club is still an exclusive establishment.

And unlike most differentials that come with an element of risk, Davis has been consistent this season, scoring at least 5 points every round and averaging 6.3 a match, good for 4th best among all midfielders. Davis is an ideal differential: Owned by few and points are all but certain. Pick him up!

Balance. In the MLS fantasy league universe, things don't always go as planned. Sometimes, no matter how strong your team is or well-prepared you are, things can and will go horribly wrong.

We've seen this scenario play out over the last few weeks. For Round 8, the conventional wisdom was to pick Dynamo players and avoid the Red Bulls, and during Round 9 the smart move was to stock up on Sounders and dump anyone from Houston. Both times, fantasy owners bombed.

So, how do you predict the unpredictable? I hinted at this problem last round, but the best way to prepare your team for good weeks even when the bad happens is to field a balanced lineup.

Here's my starting 11 for this week, take a look. 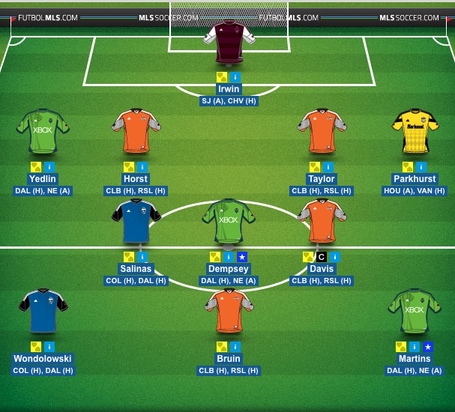 In Round 8, I went all in on the Dynamo, but knowing there was a possibility New York would decide to wake up, I brought in Lloyd Sam and captained Luis Robles, essentially giving me four Houston players and three Red Bulls. With 36 points from the two, the move paid off.

Last week, I recommended you avoid starting too many Sounders and concentrate on the Dynamo's matchup against an injury-plagued Chivas side. And even though I unfortunately capped Clint Dempsey, adding Brad Davis and Will Bruin ($8.4) to my lineup basically turned an average week into a productive one.

Sure, playing conservative might not always get you as many points as going all-in on some teams, but remember that MLS fantasy league is a marathon, not a sprint. It's a lot easier to play conservative and stay close to the top than falling behind and being forced to take risks later on.

Not that going all-in is the worst strategy in the world. When done right, it's an effective strategy that can shoot your squad up in the rankings.

But going all-in rarely pays off, even for skilled managers.

Pick of the week: Brad Davis ($10.8) Have been quietly recommending Davis all season, deserves top billing.

Strategery pick of the week: Drew Moor ($7.2) The Rapids should earn a clean sheet against Chivas, and Moor is destined for bonus points at San Jose.